A BALLINAMALLARD United footballer has become a viral sensation, but rather for what he didn’t do on the pitch.

Patrick Ferry was at Derry City in 2021 when American YouTuber, Jake Barford, made a video on his YouTube channel about the striker being the lowest-ranked player in the FIFA 21 video game. The video got over 1.5 million views.

Barford, better known as BFordLancer48 on YouTube, is one of the fastest-growing FIFA influencers and streamers with over 750,000 YouTube subscribers. Following this online success, he hatched another plan late last year.

After connecting with Ferry on Twitter, Barford made a TikTok video of him travelling from New York to meet his hero, who was now playing with Ballinamallard United.

Barford was on his way to attending the World Cup in Qatar and flew into Dublin in November before driving to the Fermanagh village to finally meet Ferry in the flesh.

The TikTok video of the YouTuber meeting Ferry and his teammates has now more than 2.2 million views. Even manager Harry McConkey made a cameo appearance in it.

“When Jake made the first YouTube video about me when I was at Derry City I had no idea about it,” Ferry, 20, said. “I only found out when my Twitter started blowing up. It was a good laugh. I never thought anything like this would happen to me.

“Then when he said he wanted to meet me and film it for TikTok before the World Cup I said: ‘No problem.’ I got slated for it by the boys of course, but it’s all good craic. Everyone was wondering who he was when he arrived.”

The TikTok video shows Barford renting a car in Dublin and driving through the night to Ferney Park where he’s welcomed by Ferry.

“Yo! It’s Patrick Ferry!” shouts Barford on meeting him.

After showing him around Ferney Park’s facilities, Barford joins a team meeting where the Mallards’ manager McConkey introduces him to the players.

“The manager let me give a team talk to the squad before training. The team had no idea who I was and why I was there. They were wondering why a stupid American had travelled all this way to meet Patrick Ferry,” Barford said in the TikTok video.

When all the Ballinamallard players found out it was because the man from Gweedore in Donegal was the lowest-ranked player in the FIFA 21 video game, they reacted as you’d expect.

“I’ve been getting some slagging from them about it but it’s all good craic,” laughed Ferry. 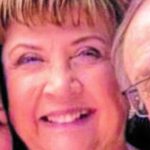 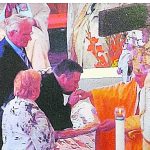