Fermanagh ladies were back training last week and it’s a much-strengthened panel James Daly has at his disposal.

The return of Kinawley players, Roísín O’Reilly, Erin and Courteney Murphy, and Devenish’s Aisling Maguire, following their departure from the panel last year is a massive plus for Daly.

The return of Kinawley sisters, Danielle and Lisa Maguire from Australia will help strengthen the Fermanagh team, as well as Aoife McCabe from Aghadrumsee and is cause for much optimism.

Added to that, a ‘new find’ for Daly is Eimear McMahon from Belleek, who is now living in neighbouring Ballyshannon and plays with Ballyshannon side Aodh Ruadh. She has sparked the interest of Donegal ladies manager Maxi Curran, but McMahon it seems has opted to don the green and white of Fermanagh.

Former goalkeeper Shauna Murphy is making her mark with Cliftonville playing soccer and Daly admits he’d love to get her back; “I’m hoping but I’m not being overly optimistic but I can hope.”

One huge concern for the Fermanagh manager will be whether Eimear Smyth will be available to him this year.
“Eimear is telling me she may take some time out,” said Daly.

Smyth, who works in Dublin, is currently involved with Derrygonnelly’s All Ireland campaign. Daly is hoping to speak to the talented forward again after her club season concludes;

“I said to her, ‘If you need to take an extended break after your season is finished with Derrygonnelly and then come in to us, but I’ll not be expecting you down the road on a Tuesday night.

“So she thought about it, then I was chatting to her and she was surprised to hear all the girls were back in. Look it, I’m just hoping, but no definite decision has been made and we’ll wait until Derrygonnelly’s season is over before we readdress it.”

Smyth’s teammates Sarah-Jane Jones and Andrea Gordon have opted out of the Fermanagh panel this season alongside Dee Curran who is going travelling.

All in all, though, Daly says there’s real positivity in the camp and cause for optimism among his 40-strong squad;

“Me and Caoimhe (Morgan) are coming up and down to training and Caoimhe is like ‘it’s so different to last year’.

“We should’ve won the Ulster Championship this year but we just didn’t have the experience in the second half to get the team across (the line) when things weren’t going well. Someone to step up and make a catch or make a block when Antrim were coming at us hard in the second half to stop the rot.”

If Daly can persuade Smyth to stay on board, there’s no doubt they’ll be a formidable outfit for whoever they come up against in Division Four or in the Junior Championship.

“You wouldn’t have two better forwards in the country than Eimear and Blaíthín (Bogue)” said Daly. “Midfielders like Roísín O’Reilly, Courteney Murphy in your defence, the two Maguires (Lisa and Danielle); there’s so much quality.”

Fermanagh’s league campaign gets underway in January. They are in a group with Antrim, Carlow and London and they’ll be targeting making the semi-final and finals with promotion the big goal at the end. 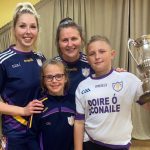 Ulster title would be ‘pinnacle of success’ for Gordon 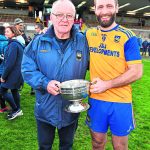 Wait over for captain O’Callaghan