A CAMPAIGN has begun to get toy giant, Lego, to lay down the first blocks of a new store in Enniskillen.
Matthew Beaumont of the Fermanagh branch of the Alliance Party, has written to the Denmark-based toy magnates to see if they would consider adding to their Irish stores.
Lego, whose building blocks have delighted and caught the imaginations of kids and adults alike the world over, are to open a new store on Dublin’s Grafton Street on August 18.
Father-of-two Mr Beaumont decided that while it was great for Dublin to get this investment, why not Enniskillen.
An email was duly sent out to Lego HQ and within days they replied to say his request had been passed on to their Head of Store Locations.
“This is a genuine plea to Lego,” says Matthew. “It’s not like it was something planned in my ‘to do list’. But until I saw that they were opening up in Dublin and were not dismissing the idea of opening shops in Northern Ireland.
“It was like, ‘hold on – if you’re open to a shop in Northern Ireland, then why not have one in Enniskillen?’.
“Lego is universally loved. Who isn’t a fan of Lego? Tell me a person who says that they’re not a fan of Lego and I’ll show you a liar.
“It was a great part of my childhood. My grandparents on my mum’s side had a big Lego box – basically to keep me quiet.
“Now I’ve grown up and have a family of my own. My oldest is five-years-old and if you leave him with a box that has pieces of Lego, he just goes with wherever his imagination takes him.
“As for what we’ve built together with the blocks, we’ve done all sorts – Hogworts being one and we’ve just finished doing the London skyline. Of course such models take days to complete.
“The way I look at it is that in my opinion, what I’ve done is exactly what I think our councillors and MLAs and MPs should be doing.
“There is a genuine need there to attract business, new retailers and new jobs to the area. I just thought to myself, ‘you know what… it is just well worth asking the question’.
“They’ve already come back to me saying they have forwarded my email to their Head of Store Locations.
“Fermanagh is now home to me – and has been for a number of years and it’s where I want my boys to grow up. It’s also somewhere I would like them to stay on at when they leave school as well.
“I don’t want them running off to other parts of the country or the world to work. If it means that I have to approach global firms to see if they would consider Fermanagh, Enniskillen and Tyrone and possible locations to expand their businesses, then so be it. This is the ‘silver bullet’ so to speak. You start getting massive, superstore retailers in, then all of a sudden, there will be a swarm of them seeing this area as an attractive proposition.
“All of this will have a knock-on effect. We would have doctors coming in and staying and ensuring we don’t have to rely on locums. We won’t have to lose teachers to Dublin, Belfast and Britain because they’ll think Enniskillen’s great as it has everything they need on its doorstep.
“Getting big firms into the area is what our politicians should be doing. I guess this request of mine was a little bit of tongue in cheek. But the fact that they’ve replied means that it’s now gone from tongue in cheek to deadly serious.
“At the end of the day, Lego is a brand about dreaming and creating whatever is from your own imagination. With businesses continually rolling into Belfast and Dublin, I’m here to fight for the underdog – I want to fight for this part of the world that is Fermanagh.”
Lego have been approached for comment. 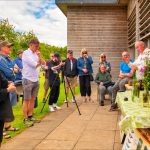