Advertisement
HomeHeadlineEnniskillen to get giant Christmas tree this year
Advertisement

CHRISTMAS is on its way to Fermanagh!

It may still be only July, and the summer may have only just arrived, but plans are already afoot to make sure Enniskillen has a very festive Christmas this year, with a giant “show-stopping” tree on its way for the town centre.

Every year the town’s Christmas lights are delivered by the local Council, with support from Enniskillen BID on behalf of local businesses. Over the past few years there have been some spectacular additions to the illuminations, such as new lights, the stunning illuminated swan on the water at Enniskillen Castle, and the 3D projections on the Intec Centre.

However, despite this, last year the town’s Christmas tree left many underwhelmed..

This year, Enniskillen BID is stepping in to ensure no one will be disappointed, with the organisation investing in a new reusable tree for the town.

Speaking to the Herald, an excited Noelle McAloon from BID said the new addition to Enniskillen’s festive display had been inspired by the spectacular tree that caused a massive social media reaction in Dundalk last year.

“Somebody came to me and said Noelle, there’s your challenge, bring a tree to Enniskillen like Dundalk,” she said, noting a lot of locals had commented that town’s tree last year had not been in keeping with the rest of the spectacular displays.

Noting BID was now in its second term, and the multi-million Public Realm Scheme would be coming to an end at some point in the near future, Ms McAlloon said they want to “up the ante a bit.”

The reusable tree itself will cost around £19,000, but will have a lifespan of at least 10 years, and is being funded by BID, who work to promote business development in the town and is supported by the local businesses.

“We thought, let’s make an impact, so we went ahead and ordered a huge artificial Christmas tree. It’s going to be outstanding,” she said.

“The rationale was that people had commented in the past that the Christmas tree wasn’t befitting of the town centre. Now we have a BID term two, we do have a budget, and we do have the end of the Public Realm.

“It will be show stopping.” 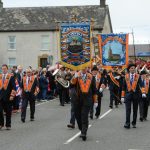 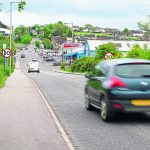