Under 15 A Championship Final

A last gasp free from David McGovern saw Devenish snatch a draw in a dramatic finale to a thrilling contest in Derrylin last night (Wednesday).

It was a high-quality and sporting final, laced with spectacular high fielding.

As the game approached full time, it seemed like the Donagh boys were going to prevail after a quick 1-1 had put them back in the lead. However, their Garrison opponents rallied again with a goal of their own.

While a draw was a fair enough result, St. Patrick’s did have the greater number of scoring opportunities but Devenish were much more clinical in their finishing.

Devenish led early on with points from McGovern and Cormac Burns but a brace of Nathan Beattie frees soon saw St. Patrick’s equalise, before a 12th minute Conor Kelly point edged them in front.

The lead was short-lived as Devenish found the net twice in as many minutes.

First, Burns netted from a pinpoint Taidgh O’Brien cross and was then fouled for a penalty which McGovern converted. 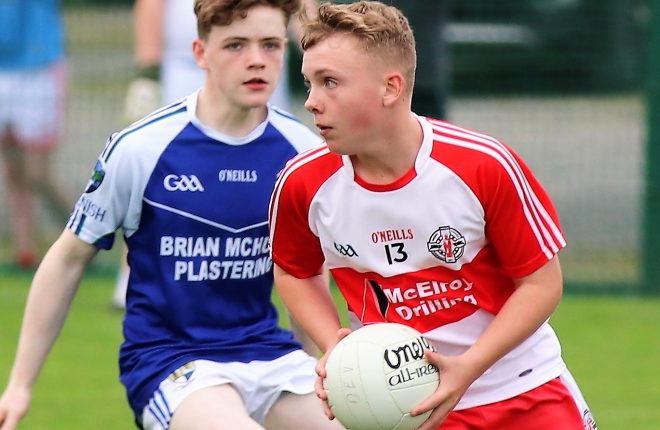 An exchange between Daire Tracey and O’Brien was followed by a 25th minute Donagh goal, Conor Kelly sliding a loose ball just inside the base of the upright before Tom McNally pointed from the kickout.

Two further St. Pat’s points, from Tracey and Danny Mohan, moved them further in front and after McGovern had hit a Devenish response, Eoghan McManus netted right on the half time whistle for a 2-7 to 2-4 lead.

Devenish were again first to score in the second half, McGovern pointing a free within 30 seconds of the restart.

St. Pat’s responded with three points from, McManus, Tracey and Beattie all on target.

Devenish then hit a purple patch, points from Cathal O’Flanagan and McGovern, followed by a 48th minute Burns goal levelling matters at 3-7 to 2-10.

A 53rd minute McGovern point from distance edged the Garrison boys ahead but it was soon cancelled by a neatly taken Beattie score.

The kickout was won by Ciaran Rice and the St Pat’s player raced in to net.  Donagh stretched their advantage when Mohan hooked over from the right, for what looked like the insurance score, 2-12 to 3-8.

Back came Devenish though. Nathan McGoldrick powered through for a 59th minute goal. Despite McGovern missing a long range free, he made no mistake from closer in, deep in injury time, to draw the game and force a replay this weekend.

Girls had ‘a point to prove’ says Daly