McMAHON – The death has occurred of Mary McMahon (Baba Keenan) in her 94th year of Bournemouth and formerly of Enniskillen, Dublin, Manorhamilton and Kiltyclogher, peacefully at her home in Bournemouth, surrounded by loving family members after a bravely fought illness.

Deeply mourned by her children Brendan, Felicity, Gerard, Marie and Geraldine, daughter-in-law Monica Macnamara, son-in-law Robin Day, her grandchildren Jenny, Laura, Ali and Kevin, nieces, nephews and extended families and friends, pre-deceased by her husband Brendan McMahon, parents Francis and Annie Keenan, her sister Angela Golden and brothers Terence and Hyacinth (F.T. Keenan Auctioneers). Sincere thanks to all who cared for her so kindly.

May she Rest In Peace

The Funeral Mass can be viewed on the following link www.funeralstreaming.co.uk/viewing-room/18005 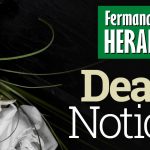