EX ARMAGH star Oisin McConville has spoken movingly of how he was on the brink of committing suicide on the lonely streets of London in 2003, as his gambling addiction spiralled out of control-at a moving public talk in the Wark Hall Belleek.

In his own frank way, he told the audience: “I was a compulsive gambler and a compulsive liar. It was in 2003 and I was after getting an operation done on my back over in England. I was on my own and I was staying in the hotel, and I was not allowed to fly until the next morning and two doors down was the bookies, so I thought that was a good way to spend an afternoon in London.

“I had £500 in my pocket and the first thing I did when I went into the bookies was to get it changed into tenners and fivers.

The Crossmaglen native told of how an insecure childhood full of doubt and lack of self-esteem propelled him into the world of gambling when he was just 14.

And during these bleak years it was Gaelic football, the sport he loved and excelled at that was his safe haven, his sacred place and it was one of the few things that he would not bet on, in an otherwise dark world of debt, deceit and self-loathing as the illness held him in a vice like grip.

He also explained how the last bet he made was for €20,000 on a horse-that lost and how it was funded by an Armagh businessman who went guarantor for a Credit Union loan to fund the bet.

“At that time I had loans from the whole country and I had also burned a lot of bridges to feed my habit.

And he talked frankly about all the money he borrowed and stole from anyone around him, including his own family and he revealed that it has taken a long time for him to regain their trust.

These days the 46-year-old has a happy fulfilled life and is now involved in GAA coaching and management.

But his lifelong addiction is always there, and he cannot even buy a GAA draw ticket and there are “guys who think that I am the most miserable person in the world.

“But that is a small price for me to pay as if I won £100 it might put me back in the bookies.

For OIsin, gambling was an outworking of emotional problems that he kept buried deep in his psyche.

“My addiction was completely hidden so I would not gamble in the same bookies and when I met people on the street when I was after losing everything I had, I would nearly be giving people a high five when I was walking down the street.

He explained: “Football was my sanctuary from all the other madness in my life. “I felt a huge freedom to concentrate on something that was good and pure.

“Sometimes I went training because there was food at the end of it and I might not have eaten for 24 hours.

“I went to Cuan Mhuire in Galway and Gamblers Anonymous which was the greatest help to me and it is important that you seek this help.

“These people help you to open up and confront your demons and they do a great job”.

In October 2005 Oisin went for treatment and came out in February 2006 and he has never relapsed. 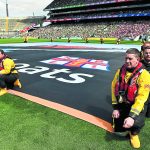