Advertisement
HomeHeadlineGraffiti artist back to brighten up the countryside
Advertisement 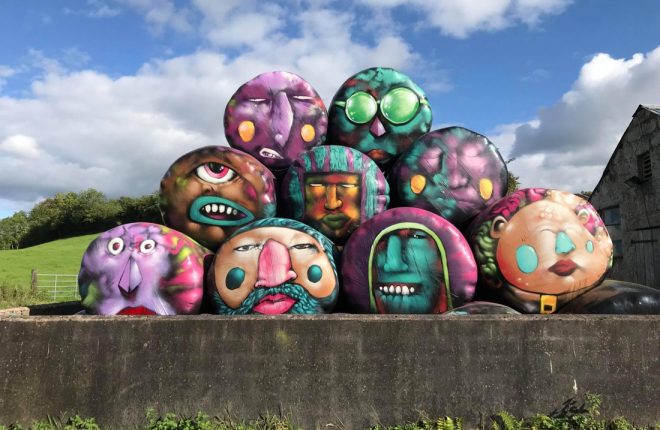 THEY’VE done it again! The creative souls behind community art group Sliabh Beagh have brought yet more colour to the fields of Fermanagh.
Having previously brightened up the countryside in 2016 with their painted hay bales, the hard working Corranny-based arts group are once again turning heads long the county’s roads.
“There’s a new set on the A4 [between Brookeborough and Fivemiletown] and there’s two new sets in Aghadrumsee, all by Kevin Largey, who is our go-to graffiti bail artist,” said Sliabh Beagh arts coordinator Donna Bannon.
“The farmer loves them, which is great,” she added, saying the group tried every year to engage with farmers in their art.
“Farmers don’t come to the workshops. We do different workshops for different community groups, but a farmer is far too busy to come at 8 o’clock in the evening. So last year we had quite a few projects working specifically in the farm environment.”
The hay bales are just one of many rural arts initiatives Sliabh Beagh have wowed the community with over the past number of years, and they have plenty in the pipeline for the coming months. This includes a special exhibition on September 21st for Culture Night.
“There’s an old post office here in Corranny, just beside the Corranny Bar, which is closed now about four or five years. We’re going to convert that into a little exhibition space for Culture Night,” said Donna, adding the evening would include a music session, textiles, plasma works, imagery, photography and so on.
Other upcoming projects include a kite project with schools which looks set to culminate with a spectacular display next year. They are also doing an “arts jam” and special forest treats coming up before the end of the year.
Keep an eye on the group’s Facebook page for up full details on the upcoming projects and events.