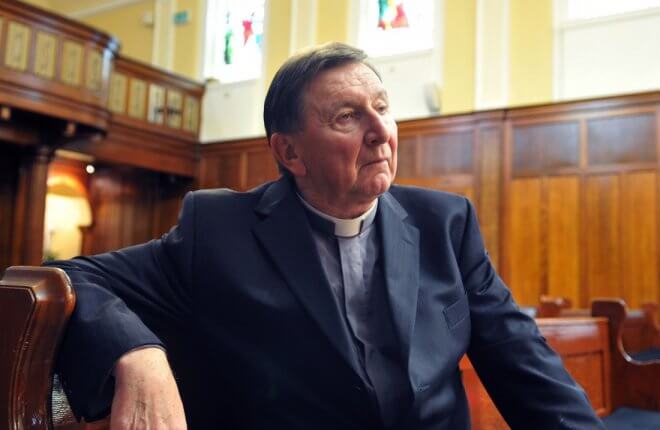 THE MANY Fermanagh pilgrims who made their way to Phoenix Park on Sunday would have noticed a familiar face on the big screen, Fr Brian D’Arcy.
Fr D’Arcy was one of many priests from around Ireland invited to concelebrate the Mass with Pope Francis, and it was a “dignified and respectful” occasion the Passionist found to be emotional.
“It was a different experience than I thought it would be but the more I thought about it driving home the more I became uplifted by it,” he said. “It was slightly emotional for me, I have to say.
“I was on the organising committee 39 years ago in 1979 and this year I had a more objective role by commentating for various stations and so forth along the way, but most of all it was a quiet time.
For me the quietness and the moving part of it was because a couple of years ago the papacy was trying to silence me because of some of the things I was saying.”
He added: “In a way it brought me a peace, that I had moved on from being an enemy of the papacy, it seems, to be able to do the biggest thing a priest can do, concelebrate Mass with the Pope himself. That was a moving thing for me. It fulfilled all of that for me personally.”
Fr D’Arcy said he found the weekend overall to have been a great success, from the “rock concert feel” of Croke Park, full of young people, to the “slightly penitential” Sunday events, where he said Pope Francis went “off script.”
“He took control himself, and he obviously was deeply moved by his 90 minute talk with various people the night before, he listened to them,” said Fr D’Arcy, in reference to the Pope’s meeting with victims of clerical abuse and the laundries on Saturday evening.
As for the size of the crowds, Fr D’Arcy said it was the biggest event Ireland had seen in a long time.
“If it hadn’t been Francis there wouldn’t have been 50,000. He has the ability and the charisma. He is a good man trying to do it, and Vatican politics is stopping it,” he added.