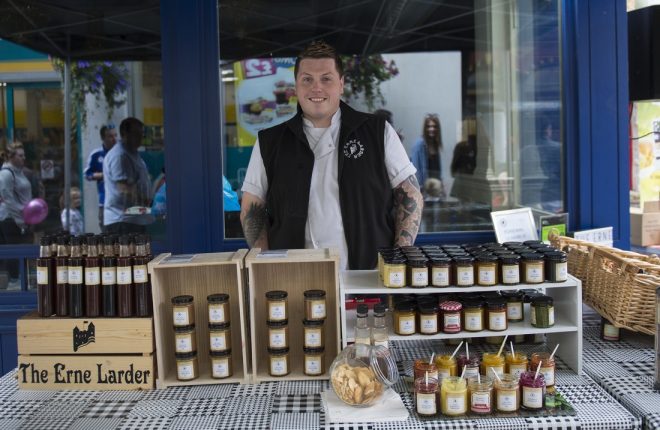 AN Enniskillen man has been taking the retail industry by storm as he has just been confirmed hailed as a new supplier for retail giant Lidl.
Declan O’Donoghue of Erne Larder will be supplying his bacon jam to the German supermarket group after he was picked as one of Lidl’s 12 new suppliers as part of the Kick Start initiative that launched earlier this year.
With a recipe that took over two months to perfect, Declan’s bacon jam will be on shelves in Lidl stores across Ireland from September.
Speaking to the Herald, Declan explains how his one of a kind product has gone from strength to strength, and what initially started as a side project for Declan has now become a thriving business.
“Around two years ago, we were down at Festival Lough Erne in December 2016 as a customer and I thought I could do something like this.
I identified jam and chutney as a slot in the market and that’s how it started. I took some jam to Christmas fairs and after that, we got a lot of emails on Facebook asking if we had any stores which at that time we didn’t, but I eventually got it into three local shops.”
From there the business grew for Declan.
He rebranded the business in October 2017, and was able to get around 40 shops to sell the product.
“I was asked by a local hotel if I could make bacon jam so I got the recipe and fine tuned it to what it is now, and it sells hundreds of jars a week,” said Declan.
“It’s been a massive hit – going into Lidl, and we sell food service buckets to hotels as far away as Galway. We are the only preserve company in Ireland that does bacon jam, and now we have bacon ketchup coming up.”
Declan, who is a father of two, runs ‘Erne Larder’ from his own kitchen in Enniskillen and is a ‘one man band.’
“I make it all, I sell it, label it, distribute it and go to shows at the weekend to promote it.
I have a full-time job Monday to Friday in Cherrywell Bakery in Lisnaskea so I am literally working all the time except for the odd evening off.”
The Lidl kick-start programme is a one off contract and 36 companies have been successful, but in the new year, only four will get listed as official Lidl products.
Declan now needs the support of local people to ensure his success continues.
“We are only trading over a year and a half so they like our products, and they were very keen to have it.  We got through every stage of the kick start programme and here we are now, two weeks away from launching it.