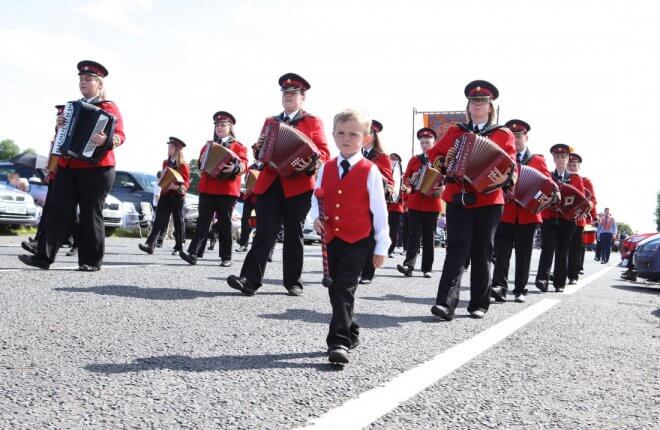 THE main Belfast to Enniskillen road, one of the county’s major routes, will be closed for several hours today (Thursday) to facilitate the Twelfth of July parade in Brookeborough.
Large crowds are expected to be in attendance in the village, which is hosting its first Twelfth demonstration since 2010, including many tourists and visitors to the lakeland county.
Alongside Fermanagh-based lodges, the county will again play host to visitors from the Republic, representing counties Donegal, Leitrim, Cavan and Monaghan. They will join with upwards of 90 private lodges, members of the Association of Loyal Orangewomen, Juniors, and approximately 70 bands in one of the larger demonstrations across the North.
Lodges and bands will move off from the assembly field on the Lisnaskea Road at 11.30am and proceed through the village to the demonstration field on the A4 Belfast Road.
The platform proceedings and religious service will commence at 1.30pm, chaired by County Fermanagh Grand Master Stuart Brooker while the guest speaker will be Rev Dr Alan McCann, County Armagh Grand Chaplain. The return parade is due to commence at 2.45pm.
Motorists are warned that congestion is expected in the Brookeborough area with the through route along the A4 closing at 11.15 this morning and not reopening again until 6pm. Traffic travelling from Enniskillen to Belfast will be diverted via Tempo, Clabby and Clogher at the Dublin Road/Tempo Road junction in Enniskillen. Enniskillen bound traffic will be diverted at Fivemiletown. Those attending the parade should note that there will be no parking along both sides of the Main Street and Station Road but parking will be permitted along both sides of the A4 to the entrance of the demonstration field.
Ballygawley, where the Clogher Valley parade is taking place, is also expected to be congested from approximately 10.30am. The A4 Old Dungannon Road will be closed to through traffic from approximately 12.30pm and a diversion will operate at Ballygawley Roundabout and at the Cabragh/dual carriageway junction.
Sinn Fein Cllr Sheamus Greene says it’s unfortunate that a main artery through the county will be closed for such a long period tomorrow.
“The A4 closure for several hours will annoy some people because it is a holiday for many but hopefully they won’t be too disrupted by this,” he said.