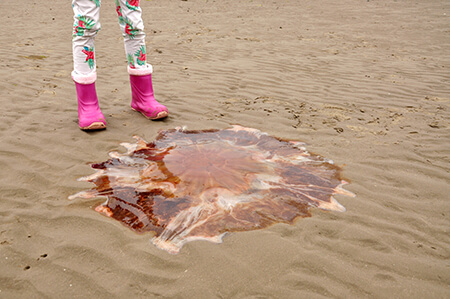 FERMANAGH folk flocking to the beach this summer need to watch out, with sightings of the world’s largest jellyfish on our nearby coastlines increasing every week.
Reports of the lion’s mane jellyfish, which can grow to a meter in diameter and have thousands of tentacles, being spotted on Donegal beaches this year are more than just seasonal sensationalism, with several incidents of swimmers at popular spots near Fermanagh being stung this summer.
One Donegal man who was stung recently has told of the effects.
“My face and body instantly erupted in a burning sensation, especially my face,” he said, adding he’d recently been stung by a smaller, normal jellyfish and the pain was very mild in comparison.
“I then developed severe chest and back pains and nervous twitches in the leg. Not fun! I ended up in the doctors for a load of drugs to calm everything down.”
He added this warning: “Be careful out open water swimming, especially skin swimmers.
Don’t swim alone and always wear your swim tow buoy.”
While this swimmer was lucky enough to be treated by his local doctor, a number of people around the county have had to be hospitalised so far this summer after being stung.
swimmers
While those most at risk are certainly swimmers, those going for a stroll on a nearby beach should also be careful, with several local sightings of the creatures being washed up.
Even when dead, though, the stingers on its tentacles can still be active for up to four days.
According to researchers at the Ryan Marine Institute at NUI Galway, the best way to deal with a sting is to rinse the affected area with vinegar then soak it in hot water for 40 minutes, or use a heatpack.
The lion’s mane jellyfish is not normally a common sight in Irish waters, except on the east coast.
However sightings have been growing on the west coast over the past few years, while numbers appear to have been soared dramatically over the past month.