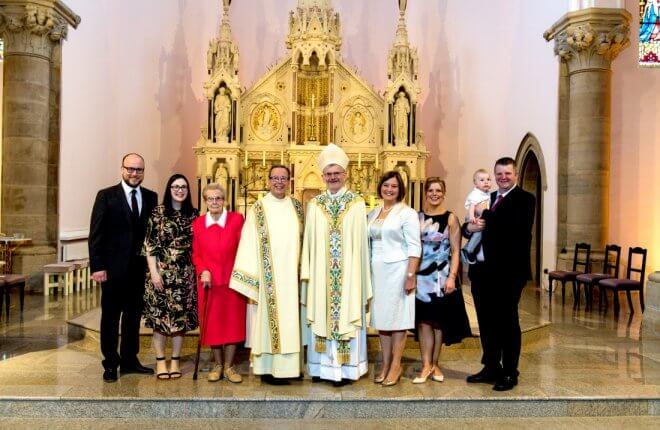 IN RESPONSE to the fall in priest numbers the Catholic church is encouraging a greater role for laypeople. In an historic and highly significant first for the diocese of Clogher, a married father of two children was appointed to the post of deacon, a position in which he will carry out a range of duties including funerals and weddings.
Retired school principal Martin Donnelly (61) became the first new deacon in Clogher diocese when he was ordained in St Michael’s Church, Enniskillen, in front of a large congregation.
Martin and his wife Caitlin live in Enniskillen. They have two children Ciara (married to Cathal) and Brian (married to Ruth) and a nine-month old Grandson, Lorcan. Martin spent his working life in the field of education as a teacher, principal and senior education adviser.
On Monday evening the new Deacon presided at Evening Prayer of Thanksgiving in St Michael’s Church
Speaking over the weekend Mr Donnelly told the Herald that growing up in Portadown, just a few hundred yards from St Patrick’s Church, he regularly called into the church on his way home from school.
“ Prayer was part of daily life growing up at home and from the earliest age I remember being brought to Mass, Benediction and saying the Rosary in evenings in Lent.”
He became an altar server at the age of seven while his mother taught him the responses to the Mass in Latin. Later he joined the church choir and a reader at Sunday Mass. Before heading to university he joined the Society of St Vincent de Paul in Drumcree Parish and sang in the church choir.
Since moving to Enniskillen in 1993 he has taken up similar roles.
Asked what motivated him to become a Deacon he said it wasn’t an instant decision. He was always interested in serving the community having spent 36 years in the education service.
“I felt that I could not presume that I was a suitable person for diaconal ministry but after much prayer and with the help of family and others I took the step of inquiry and discernment.
“I firmly believe that I did not chose to become a deacon but it was God who called and I responded,” he explained.
The issue was discussed openly at home, so it didn’t really come as a surprise to the family.
”My wife attended formation weekends with me over the time of study and formation and remains fully supportive of my calling. My children and their spouses discussed diaconate with me and encouraged and supported on each part of the journey. I don’t think that on the day we were married in 1980 that my wife thought she would be the wife of a ‘clergyman’.
However, my wife and family are happy that in this ‘later’ stage of life I can have a more active role in the community.
In his role he hopes he will be available to celebrate marriage and baptism and family life and to be there for people in times of sorrow, pain and suffering.
He has been assiged to the Enniskillen parish and will be a member of the clergy team there.
“As a Deacon I will proclaim and preach the gospel, baptise, preside at marriages and funerals (burials and reception of remains), vsit and bring communion to the sick at home and in the hospital and within chaplaincy in schools. With over 150 baptisms, 75 funerals 50 weddings in parish along with ministry to SWAH and schools- I expect to be busy,” he added.
Asked about the future of the church in Ireland Mr Donnelly said many presumed the church was about priests, but he quickly added that priests were only part of it.
“For me the Church is about family and community and vocations to ministry have their beginnings in family and community. I feel that the revival of Diaconate is something very positive for the Church in Ireland. It will allow those like myself who feel called to serve to practically live out that calling in their community,” he said.
“The path that the local church here in Clogher diocese and in Enniskillen is taking today is in response to a much wider renewal with the entire Christian church that has been ongoing for a very long time. “