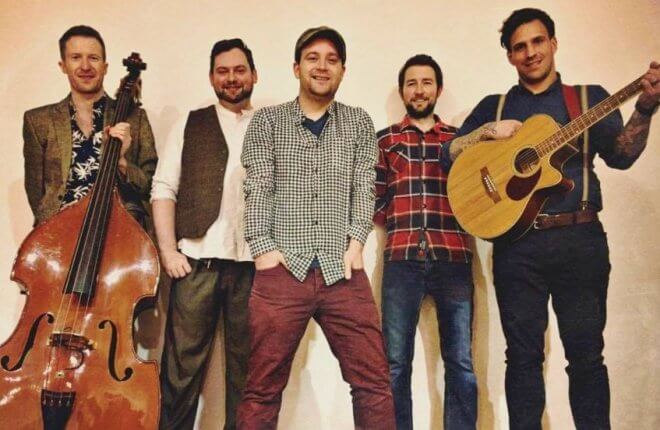 The Hand me Downs play at the new Shoreline Festival

ENNISKILLEN is getting ready to rock this summer, with the announcement of a brand new weekend event, Shoreline Music Festival.
From the team behind the popular Dergfest, Shoreline will take place at Stuart’s Car Park from August 3rd-5th. Not your average summer town festival, with everything from well-known dance acts to famous rock bands to country stars, the organisers are hoping the weekend will provide local music with an alternative to travelling for decent live music.
“The whole festival genre is Belfast centric. Outside of Belfast there’s really nothing of any note,” said a Shoreline spokesman. “People are bussing all the way to Belfast to go to festivals, why not bring the festivals to us.”
There are certainly some big names on the Shoreline line-up, with singer and rapper Sean Kingston heading up the Friday night, English favourites Scouting for Girls on the Saturday night, and country twist on the Sunday with Nathan Carter and Lisa McHugh.
Nathan and Lisa aren’t the only local interest, though, with Ryan Sheridan and the Hand Me Downs featuring high up on the billing.
“It was very important for us to make sure we had the local flavour on it,” said the spokesman. “DJ Warren Adam is from Enniskillen too, and on the Sunday night we’ve Nathan. He was very keen to do it, and so was Lisa. They both came on board pretty quickly.”
The organiser said, having had good practice with Dergfest that has attracted big names over the past four years, the idea for a festival in Enniskillen came about after their friends in Pat’s Bar in Enniskillen and Enniskillen BID both expressed a desire for an annual event and asked them to come on board. They have since been working closely with local businesses, and will continue to do so, and have made sure the festival takes place in a town centre location.
It won’t be just one year, either, with the spokesman stating going for bands as well-known as Scouting for Girls showed how serious they were about making Shoreline a must-go-to slot on the Irish festival circuit
“We wanted to make a statement that we we’re going to bring big names,” they said. “This is a five year plan for us, we’re not just coming in for a year. We’re committed.”