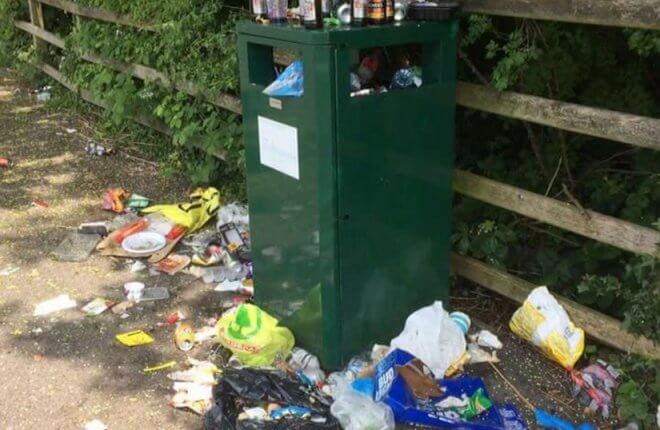 BOTTLES and beer cans thrown in the lough, bins set on fire, rubbish strewn across scenic spots, and, worst of all, lifebouys ripped out and dumped in the water – just some of the common sights around Fermanagh over the past couple of weeks.
Since the heatwave began, jetties and other popular sunning spots have been thronged with revellers enjoying the heat. While the majority have been doing so respectfully, “a handful of young people”, according to police, have been leaving the place “like a tip.”
Police have received numerous reports about anti-social behaviour on jetties recently, such as drinking and noise, and have issued a strong warning of the dangers of drinking near water.
With regard to the mess left behind, police said on one day last week 21 binliners full of empty alcohol containers and other rubbish were removed from one jetty in Enniskillen.
“Not only is it unsightly for everyone including our tourists, but is very harmful to our wildlife,” the said.
Locals have been doing their own bit to clear up the mess. Enniskillen man John Caswell and his granddaughter Jasmine (10) were out enjoying a kayak in the sun at the water in the sun last Wednesday when they lifted three large bags, mostly of beer bottles and cans, bags they also found floating.
“The vast bulk of it was in the wee lake at the back of Erneside,” said John. “We didn’t go out to litter pick, we just saw so much of it, and the more we picked the more we saw.”
He added: “What we got was 50 plus cans and bottles. Those are the ones that were floating. We’ve no idea, of course, how many were thrown in and sunk. We’re not scuba divers, so we don’t know what was below. The mind would boggle to see what is down there.”
The problem wasn’t in Enniskillen, either.
“I do a wee bit of swimming every day down at Muckross,” said Kesh man Jeff Greenfield. The past week there’s been terrible trouble down there, people coming down in the evening and really making a mess. It’s really serious.”
Speaking last Thursday, he was particularly annoyed because he’d found two liferings lying in the water that morning. He added bins had been burnt out, too.
“I’m not trying to shoot down the young people, but the state they’re leaving the place in is disgraceful,” he said.