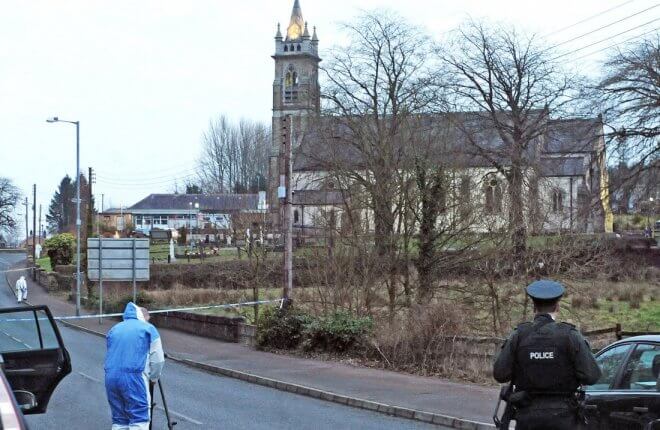 Police investigate the scene where two people were shot at a traveller’s wedding at St Mary’s Church in Newtownbutler.

THE FATHER and son involved in a fatal shooting outside a wedding in Newtownbutler in February 2015 have been jailed for seven-and-a-half years between them.
Patrick McGinley Snr (49), of Ardlougher Road, Irvinestown and his son William McGinley (29), of Sally’s Wood , Irvinestown, were initially charged with the murder of 63-year-old Bernard ‘Barney’ McGinley and the attempted murder of his son, Bernard Oliver McGinley, which they denied.
The charges were later reduced. Patrick McGinley Snr pleaded guilty to the manslaughter of Barney McGinley, while William McGinley pleaded guilty to wounding Bernard Oliver McGinley with intent.
Patrick McGinley Jnr (24), of Lisfarrell, Edgesworthtown, Co Longford, and his brother Bernard Patrick McGinley (18) both pleaded guilty to affray in relation to the incident.
Dungannon Crown Court, sitting in Belfast, heard there had been bad blood between the two families, described as “a family feud.” When Barney McGinley arrived at the wedding there was an apparent altercation and a “crude” home-made “pipe gun” was produced, which the court was told had been brought to the scene by someone with the deceased.
Patrick McGinley Snr claimed when the weapon was produced he forcibly removed it from Barney McGinley and a struggle ensued, during which it was discharged. William McGinley then picked the gun up, reloaded it, and shot Bernard Oliver McGinley.
Patrick McGinley Jnr and Bernard Patrick McGinley then became involved in the altercation, which was described as a “melee”.
At the sentencing hearing on Friday, relatives of Barney McGinley, who was described as a loving grandfather of 48, shouted at the defendants, and his widow banged on the door of the public gallery repeatedly.
Mr Justice Conlon said it was clear the weapon had not been brought to the scene by the defendants, and said the was no question of premeditation or planning involved.
Patrick McGinley Snr was jailed for four years. He will have to serve a further four years on supervised licence when he is released.
William McGinley was jailed for three-and-a-half years. He will serve a further three years and nine months on supervised licence.
Patrick McGinley Jnr was sentenced to 150 hours community service, and Bernard Patrick McGinley was given 12 months probation.