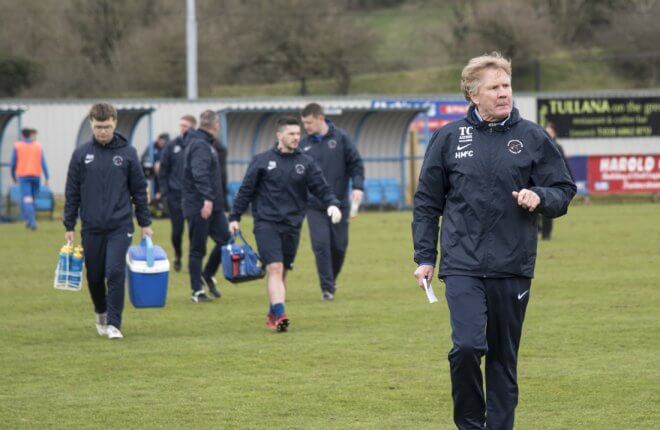 Two season defining games loom for Ballinamallard in the coming week. First they entertain Dungannon at Ferney Park this Saturday afternoon. Then they host fellow basement battlers Carrick Rangers on Tuesday.
It’s no overstatement to say that Ballinamallard’s Premiership fate could be sealed by final whistle next Tuesday. With that in mind Mallard boss, Harry McConkey, is carefully marshalling his forces for a few days of do-or-die football.
“We’ll do our homework on Dungannon as we did for Warrenpoint,” said the Ducks boss. “We want to be in a good position going into the Carrick game. If we get something out of the Dungannon game, whether it be a victory or a point even, we want to still be going into the Carrick game with confidence. The big thing is to get another performance.
“Yes, there are players hovering on bookings, but we’re in a situation where we can only go out and grab each one game as it come.
“Dungannon are a formidable team. I watched them in the Cup Final against Ballymena and was extremely impressed by them. They played cultured football and Rodney McAree has them extremely well drilled. There’s about seven of their lads who are over six foot and they are always a huge threat at set pieces.
“We’ll have our hands full trying to combat them. The last time Ballinamallard played them up there they dominated the early stages of the game, but didn’t put the ball in the back of the net and as a result Dungannon became stronger.”
And with the highly regarded McAree signed up for another tour of duty at Stangmore, McConkey is expecting the Swifts to continue to work their socks off for the Gaffer right up to the last day of the season.
“Rodney McAree has signed a new three year contract and that has given them a lot of stability and you saw that in their performance against Carrick as the players responded to that news. They did us a favour last Saturday, but this Saturday they’ll be doing us no favours.”
With the sides boasting identical scoring records it is the defence which tells the tale of the clubs position on the table. Swifts have been relatively sound, while Ballinamallard have given up an average of over two and a half goals a game this season.
McConkey agrees that it could well be the Mallards defence which holds the key to the outcome of this game.
“We don’t need to change an awful lot in terms of our approach to the game. We know that with a team like Dungannon with quality players who will try to open us up that we have to stay compact and very much together when we are out of possession.
“Again, when we press we have to press together. That’s something we’ve been trying to develop with the players and we’re starting to see it now. There was a good physical picture of that on Saturday and again against Glenavon and Linfield.
“When we do get the ball it is important that we do use it a bit better and with a bit more purpose.
“Players are beginning to understand what’s being asked of them and that’s very rewarding for me as a coach, to see them taking on board what we’re asking them to do and carry it out on the pitch.”