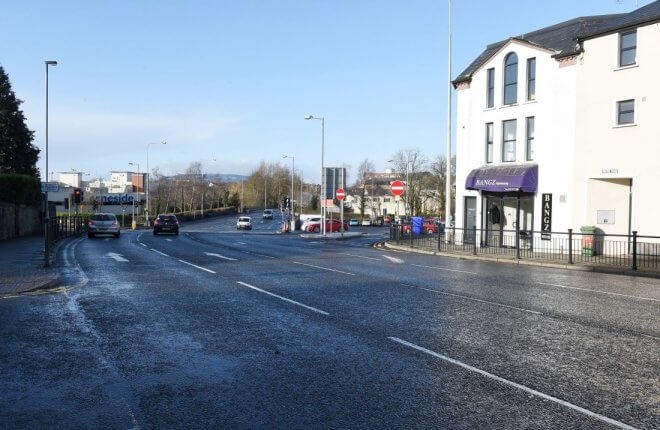 A £55,000 resurfacing scheme for Friths Pass, Enniskillen finishes this Sunday

RESURFACING works at one of Enniskillen’s busiest junctions will be completed this weekend, the Department for Infrastructure has confirmed.
Last month, many motorists expressed their anger as roadworks caused the town to come to a standstill on a busy Sunday. The delays were caused by the £55,000 scheme to resurface the A4 at Friths Pass from at Inis Ceathlinn Bridge to the junction with Quay Pass.
The road works caused difficulties for those out and about on Sunday, February 18th particularly those hoping to access Tesco, Asda and Erneside Shopping Centre. Erneside Manager, Jim Masterson told the Herald at the time that the works had caused “a considerable amount of inconvenience and disruption for customers”.
The work was due to be completed on the following Sunday, February 25th but then postponed again until March 4th with the Department vowing to provide additional signage to assist traffic. The recent extremely low temperatures and resulting snow and ice have caused the completion of the works to be delayed.
A Department spokesman has confirmed that the postponed works will now take place this Sunday, March 25th. “Friths Pass will close to traffic from 8am to 8pm. Traffic diversions will be in place via Queen Elizabeth Road and Belmore Street,” he added.