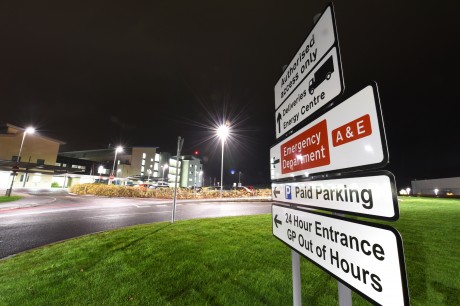 The accident and emergency entrance to the South West Acute Hospital

A MAN who shouted and swore at police outside the SWAH emergency department as he was frustrated at having to wait for treatment has had his sentencing adjourned.
Conor Rodgers (48) of Drumannon Rise, Omagh appeared at Enniskillen Magistrates Court on Monday where he pleaded guilty to disorderly behaviour. Rodgers had appeared before Omagh Magistrates Court last week on a charge related to an incident at SWAH on the same night.
At approximately 2.50pm on December 9, police were called to the hospital after Rodgers became abusive towards medical staff and the ED receptionist. Police spoke with him in the waiting area, where several people were present.
At first Rodgers refused to speak to the officers, and when he did speak he became agitated and raised his voice. He then refused to listen to the police.
Rodgers left the waiting area and went to his car, shouting back “f**k off” to the police. When he was cautioned by police for disorderly behaviour he said “you think I give a shit”, “I don’t give a f**k” and “f**k away off.”
Rodgers was warned if he returned to the hospital he would have to behave appropriately or faced being arrested. Defence barrister Stefan Rafferty said his client had returned to the hospital around 45 minutes later, having been told to do so by staff after he’d been triaged.
District Judge Nigel Broderick asked Mr Rafferty “why should we not send him to prison”? Mr Rafferty, who questioned why both cases had not been heard together, explained when Rodgers had been before Omagh court last week he received a suspended sentence.
Mr Rafferty said both incidents, and another before Derry court, had arisen out of frustration by Rodgers, who he said “felt he wasn’t getting the treatment he deserved.” He added Rodgers’ condition had now worsened, and surgery scheduled for next month had been brought forward to this week.
Judge Broderick adjourned the case until April 30 to allow the defendant to receive his treatment, and for his case before Derry court to take place.