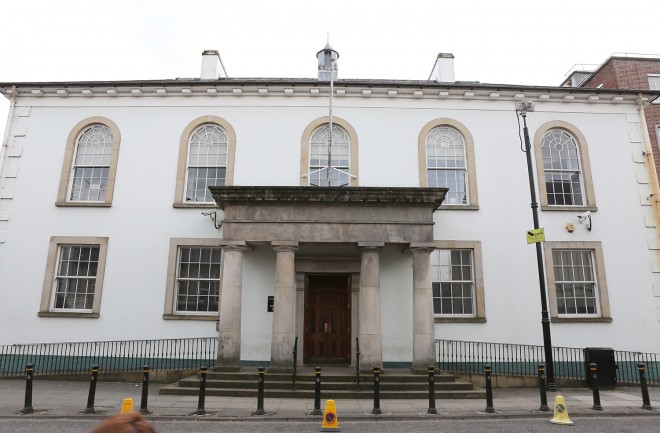 A judge has slammed a mother of two for refusing to give evidence in court as she contested charges of careless driving and drink driving.
Kellie Grimes (32) of Cloy Road, Meenmore in Ederney appeared before Enniskillen Magistrates Court on Wednesday to contest the charges relating to an incident on 22nd August last at Keeran Road, Irvinestown.
The court heard that at around 1.45pm on the date in question, police received a report that a car had gone off the road and crashed into a telegraph pole.
A police constable who attended the scene told the court that he found Grimes and a number of young children being treated in an ambulance who were later conveyed to the South West Acute Hospital as a precaution. He said that there was no-one in the crashed car at the time.
The policeman said that when he spoke to the defendant, her speech was slurred and he detected a smell of alcohol. He added that Grimes told him to “f*** off”.
The court was told that a bottle of spirits was found in the car at the accident scene while a bottle stop was discovered in the ambulance which conveyed Grimes to hospital.
“She was arrested and bailed to appear at Enniskillen Police Station at a later date at which point she gave a no comment interview to police.
Defence barrister Stephen Fitzpatrick pointed out to District Judge Alan White that there was no-one found in the crashed vehicle and no evidence to show who had been driving.
Mr Fitzpatrick added that Grimes would not be giving evidence at the hearing.
The judge rejected this argument: “I am in absolutely no doubt that she was driving. I am satisfied beyond reasonable doubt that she is guilty of driving with excess alcohol.”
Addressing Grimes directly, he said: “This is ridiculous. You know full well that you were driving and you should have accepted your guilty straight away.”
Grimes was disqualified from driving for 20 months and fined a total of £415.
Judge White refused a request from Mr Fitzpatrick to certify his client for the drink driving course, noting that she has a previous conviction for being drunk in charge of a vehicle.
“I will not consider for the drink driving course someone who did not plead guilty. She is not addressing the underlying problem,” he added.