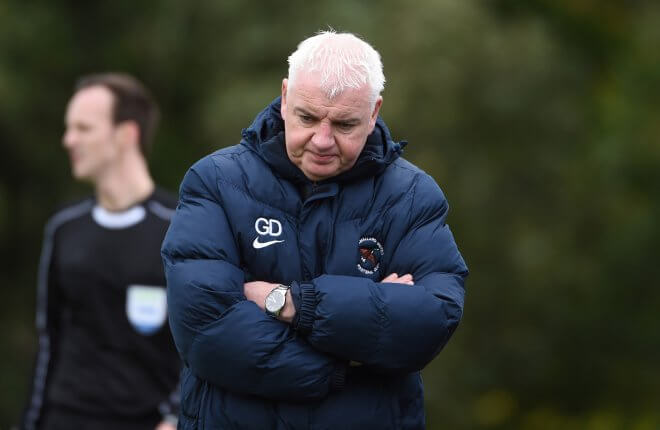 The bombshell of Gavin Dykes departure from Ferney Park was dropped on Monday, but the Sligo man reveals his mind was all but made up after Saturday’s horror show performance against Ards.
“I couldn’t watch it,” said Dykes. “I had to do what was right for the football club and I honestly believed that the players knew how big a game it was, they knew the importance of it. And to go out and put out a performance like that which was totally lacklustre, lacking in effort and intensity after starting quite well, there’s something not right.
“They’re not listening to me any more. You can’t get rid of 20 players. The easiest thing is to try and get them motivated by somebody else.
“I went to the Board after the game. We said we’d sleep on it. I felt the best chance that Ballinamallard have of staying in the Premier Division, which is really what I want, is if there is a new voice. The Board reluctantly accepted that.”
As the Mallards prepare for another huge game at the weekend with the trip to Lurgan to take on high-flying Glenavon, they has been no official word on a replacement.
In the interim is expected that Stephen Feeney, Brian Khan and Andy Crawford to look after team affairs until a successor is appointed.
One of the early front runners for the post is Lisbellaw native Harry McConkey. McConkey won the Junior Cup with Lisbellaw United and won the Intermediate Cup with Ballyclare Comrades, going on to play in the Irish league with them and later with Ballymena United and Coleraine. He concluded his playing days at Ballinamallard, winning a league title and would be a popular appointment at Ferney Park. He has management experience at Dungannon Swifts and international junior level.
However outgoing manager Gavin Dykes says whoever succeeds him will be taking on a challenging station.
“Ballinamallard are punching above their weight, they know that, everybody in the league knows that. For these people to be in the Premiership is an amazing feat. Besides the first year they went up they’ve been fighting relegation every other year, and they’ll be fighting it next year if they stay up.
“They don’t have the biggest budget. The location is very difficult to attract players to and if you put those things together it’s amazing they have staying the top level of football.
“You need a lot of things to go for you. I feel a lot of things didn’t go for us this year, but that’s part and parcel of football. I’m big enough and old enough to know I didn’t do the job well enough, I didn’t motivate the players well enough. I could have kept going to try and see this out, but the results aren’t good enough and the buck stops with me.”
Whoever takes on the job will have a major battle on their hands if they are to avoid the drop to the Championship. However Dykes is adamant that the resources are there to pull off the biggest Houdini act the league has seen in recent seasons.
“The squad we put together should be doing a lot better and I’m convinced of that. That’s why I believe a new voice coming in would give it a chance to stay up. I’ve tried everything else to get a bounce, believe me. I was very disillusioned after Dungannon and I was full sure that we’d get a response against Ards.
“We started really well and in the first five minute we could have scored and we should have scored. We didn’t, we conceded and we collapsed and that, to me, is the most hurtful thing. It doesn’t represent who I am. A team always reflects their manager and that didn’t reflect me. So in the best interests of the club a new voice was needed.”
Now  Dykes plans to take a break from the game after a turbulent rollercoaster of a reign at Ferney Park.
“I was there two years nearly and it’s engulfed my life. I’ve an exceptionally busy job. I don’t know how I do what I do, never mind do football on top of it. I intend taking a big break out of the game. I don’t need football in my life. I’m not like other people that way, it’s not my living. I’ll take a wee break.
“I’ve done a lot of projects. I’m 50 years-of-age. I’ve been in this business since I was 18 and I’ve never had a break from it. The longest I’ve been out of football is a pre-season. I’ve been asked if I’ll do some media stuff so I might do that then look and see where I go from there. There’s no big appetite to go back into it at the moment.
“I’ve had a fantastic time at Ballinamallard. I’ve met some smashing people, I can’t thank them enough for how welcoming they’ve been. I’m very disappointed to be leaving, but the club is bigger than everybody else.
“I do believe that if we get a few results, starting this Saturday if we can get a bounce, that it will be worth it.”