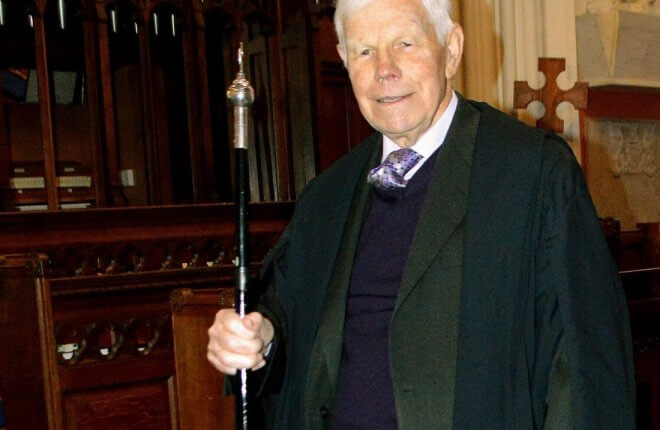 JACK Watson, who has served as caretaker, sexton and the Dean’s Verger at St Macartin’s Cathedral in Enniskillen for almost 56 years, has retired.

In that time, he has attended an estimated 9,000 services in addition to almost 500 weddings and hundreds of funerals.
At a presentation to Jack recently worship in the cathedral, it was stated this was a record length of service for the cathedral if not anywhere in the Church of Ireland.
For 12 of those years, Jack was also caretaker of both the Cathedral Hall and the cathedral. “This was a big job as it not only involved normal caretaking duties but also in the early days involved cutting the grass using a scythe and clipping the hedges by hand,” explained Sam Morrow, secretary of St Macartin’s Parish.
Since 1974, however, the duties were divided and Jack continued the work associated with the cathedral.
Over the period of almost 56 years, it has been calculated that Jack would have prepared the church for about 9,000 regular services, as well as 492 weddings when Jack was in the porch to welcome the bride and groom and give them words of encouragement.
There were many sad occasions too and Jack would have been present at an estimated 1,300 funerals to shake hands and express sympathy to the bereaved.
Paying tribute to him, Sam Morrow secretary of St Macartin’s Parish, concluded: “The parish has been superbly served for almost 56 years by a man of faith. He has been a very modest and kind man and the parish wishes to mark this outstanding service by way of a presentation.”
Jack said: “It was an honour and I regarded it as very important to fill that role.” Jack and his wife, Ethel have a son, Jonathan and three daughters, Carol, Mae and Ruth.