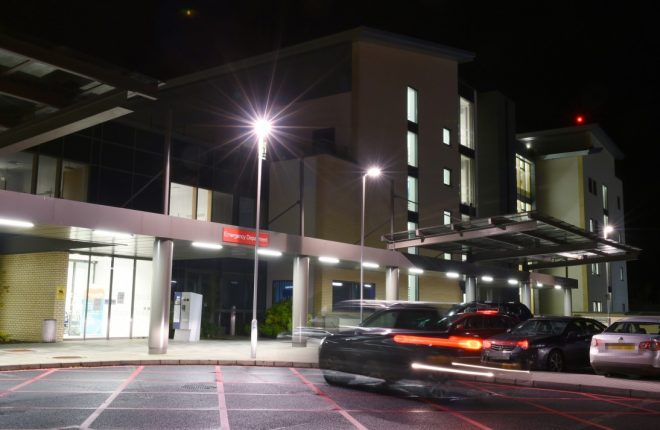 The accident and emergency entrance to the South West Acute Hospital. RMGFH21

THE EQUIVALENT of more than half the population of Fermanagh attended the accident and emergency department at the South West Acute Hospital last year.
There were 34,152 attendances at the SWAH accident and emergency department in 2017. That was an increase of almost 2,000 on the previous year, and an increase of over 5,000 since 2013.
A spokesman for the Western Trust said the increase at SWAH was in keeping with trends across the health services as a whole.
“Like other emergency departments (EDs) regionally and nationally, the number of attendances to the South West Acute Hospital’s ED are increasing year on year,” they said.
“The reasons for this are multifactorial, including the growing and ageing population with increasingly complex healthcare needs.
“In recent years the challenges with patient flow through and out of the hospital regularly results in patients who would previously have been referred directly from the community to a ward bed for admission being redirected to the ED until a ward bed becomes available. These patients are also included in the number of attendances.”
Cllr Debbie Coyle, who herself works in the health service, said with regard the ageing population, more needed to be done to prevent patients ending up in hospital in the first place.
“A lot of the reason would be around falls,” she said. “To me that means a lot of work needs to be done around prevention.”
Cllr Coyle also stressed it was important to makes sure older people, who have worked hard and paid taxes, don’t feel like they’re a burden. Pointing out most don’t need hospital care, and those who do are entitled to it, said some older people feel guilty taking up a hospital bed.
“They shouldn’t be seen as a drain on resources because they’re not,” she said.
During the busy period over Christmas, the Western Trust had urged people to only attend in actual emergency cases. When asked about this, Cllr Coyle reminded people to contact their pharmacist or GP in the first instance, if possible.
Overall, Cllr Coyle said it wasn’t “just about pumping money into the hospital”, which she said was needed.
Instead, she said more money needed to be invested in GP services and bringing health care to the community, also.
“The whole health service needs a holistic approach,” she said.