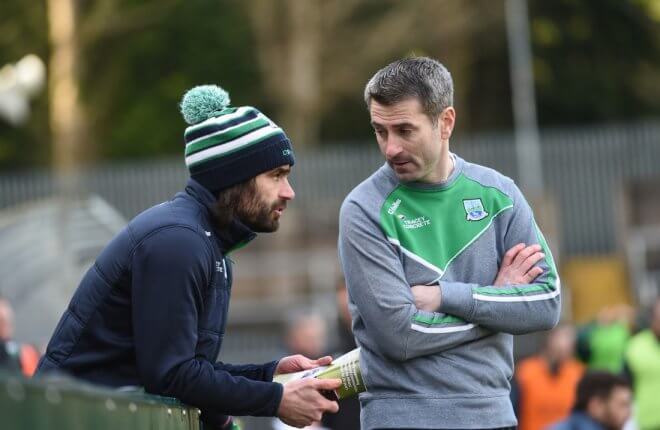 Two-time All Star Barry Owens has been hugely impressed with the form of Fermanagh this season and believes the depth in the squad is showing that this current Fermanagh team really can go somewhere.
It’s high praise from the 2004 and 2006 All-Star who reckons performances to date indicate promotion is a realistic objective.
Fermanagh’s 2-11 to 1-6 victory over Offaly on Sunday made it two wins from two in this year’s NFL Division 3 campaign. Owens says a winning run is all that matters for now.
“The performances may not be of the highest of standards but put it this way it’s a results business and the players have now made it two from two. I would be more worried if the performances were not quite right at the end of the league campaign. The games against Wexford and Offaly had to be won and thankfully that’s what the team have done.”
Fermanagh have won five games from six, taking the McKenna Cup into account, so it has been a fine start by Rory Gallagher’s men and a few things have caught the eye of Owens.
“I am sure the management team are happy with plenty of things. Conall Jones has started well and has a keen eye for goal, the players can break at great pace and they are moving the ball at speed, while the squad as a whole seems to have a great togetherness and a talented pool of players at his disposal.”
Sligo will be next for Fermanagh with the Erne men make the short journey to the Yeats County.
Owens knows the neighbours well and is pretty sure Fermanagh won’t have it all their own way in Markievicz Park.
“I always remembered the pitch being very tight so straight away that will suit a big physical side like Sligo. They can be tricky and the win over Wexford will have really helped them after the heavy Armagh defeat the first day.
“But in saying all of that if Fermanagh want to get promoted then we need to be going to Sligo and winning, a target of three wins from three I am sure would have been the goal and the squad are on the road for that now.”
The Division 3 league seems to be slowly taking shape with Armagh, Longford and Fermanagh all leading the charge for the top two promotion spots. Owens believes that games against these counties will be the deciding factor.
“Armagh and Longford will be huge, Derry have started badly and minus the Slaughtneil players I can’t see it getting much better any time soon, against Armagh it has to be a revenge mission after last season’s qualifier defeat. These are the games the players will really relish and its why you become a county player in the first place.”
Looking at the players that have came in and done well this season, Owens has had his eyes opened by quite a few.
“Daniel Teague has been really impressive, he is a small lad, but is extremely quick and seems to be a real worker. The Cullens have been superb this year and have made numbers three and six their own, while Cian McManus from my own club has slotted in at corner back and done really well. Kane Connor is another player that probably didn’t see much game time last year, but this season has been really strong and his point on Sunday was a fine score.”
Owens will appear once again for Teemore in the 2018 season under the new manager of Teemore, Anthony Drumm. He says he is looking forward to the new season.
“We are in Division 2, but thankfully we are also in the Senior Championship. We only got back out last Friday, but it’s good to be out and I am sure a lot of clubs will be hoping to gain promotion this season, Division 2 is never easy and really there are a lot of clubs who have got stronger.”