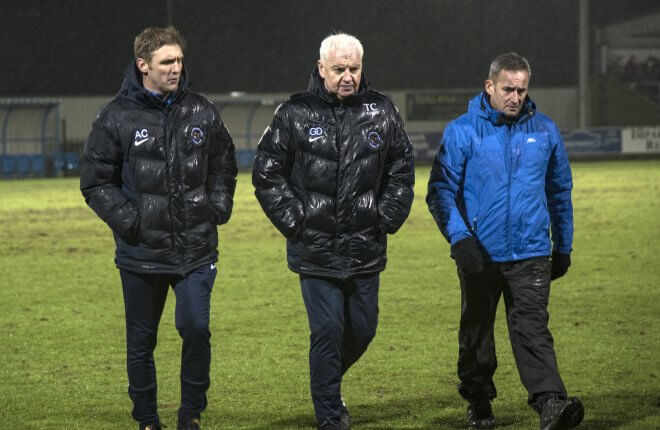 Gavin Dykes, Andy Crawford and the backroom team were content with the result but know there’s plenty work to be done in the coming weeks

In many respects, given last Saturday’s rousing victory against Cliftonville, it is a shame Ballinamallard don’t have a league game this week to try and build up a head of steam.
“It is,” agrees Mallards manager Gavin Dykes. “And last time we won a league game against Carrick we didn’t have a league game the following weekend either. But at the same time the cup is a nice distraction and we have a huge game against Glentoran on the Tuesday night away.
“It’s going to be a busy week we go to Ballymena in the cup, then we’ve Glentoran in the league and then we got to Ballymena in the league. I’m sure we’ll utilise the squad as much as we can, but hopefully we won’t pick up many injuries. Every time we play three games in a week we always pick up injuries, so hopefully the squad will be the strong enough for us to carry that.”
Given Ballinamallard’s position at the foot of the table, league points are obviously the priority. However Dykes isn’t writing off a cup run altogether.
“People ask me about priorities and I always say it’s the next football match. We’ll do everything we possibly can to try and stay in the cup.
“Will we be mindful that we have a huge game on Tuesday night? Yes, of course we will. Certain people we know won’t be able to play the two games. We’ll have to prioritise and see how people are later in the week.
“But we’re still going to Ballymena to try and get into the next round of the cup, that’s what we want to do. I’m a great believer that any team on any day can win a cup match. We’ll go there positive, but we will be wary of some bodies, because some won’t be up to two games in such a short space of time.
“Injury-wise we’re not bad, the only one who’s out really is Niall Owens. Suspension-wise Ryan O’Reilly is alright to come back in. There’s a lot of lads we have to manage Stephen O’Flynn, McKenna, Hutchy and people like that because when they get fatigued they pick up muscle injuries.
“We have a good enough squad now that if we’re missing one or two it doesn’t weaken us that much. Hopefully we can push on, be positive, give Ballymena a game. If we can get into the next round that’s great, but I’m not going to tell a lie, we’ve nearly a bigger game on the Tuesday night against Glentoran.”
Ballinamallard will go into that game at the Oval looking to leapfrog Carrick who they are currently just a point behind, although the Rangers do have two games in hand.
“We can only control what we can control,” said Dykes. “Games in hand have nothing to do with us. People have to win football matches. We’re a point behind Carrick.
“After the disappointment of our performance against Warrenpoint where the first 45 minutes were poor it was great to get back to a positive performance. We’re confident that we can put a string of results together. There’s a bit of confidence and momentum in the group. In our last three home games we’ve drawn one and won two now we just have to continue that.”