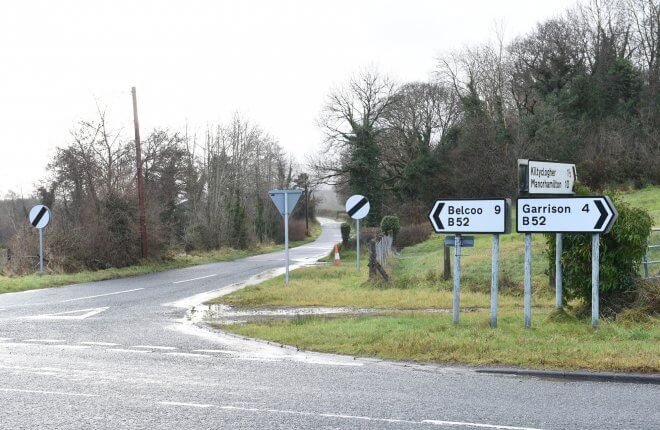 NOTHING FOUND… at Kiltyclogher Road, Cashel

For the second time in a month, police have carried out an extensive search for an explosive device in the Cashel/Kiltyclogher area on the Fermanagh and Leitrim border.
Three weeks ago, the road between Cashel and Kiltyclogher was closed for over 48 hours, as police and gardai carried out similar searches for a suspicious device in the area.
On Monday morning, the small village of Cashel was disturbed again as a number of police jeeps, unmarked police cars and other units entered the village shortly after 8am to carry out a follow-up search following reports last week that a suspect device had been left in the area.
The Kilcoo Road and Cashel Road were closed, and four police vehicles and six officers were present at Cashel Cross while one unmarked police car blocked the entrance to the county Leitrim village at Kilcoo.
The roads reopened this morning (Tuesday) and nothing untoward was found during the search.
Local SDLP Councillor John Coyle told the Herald that the police must act on the information they receive to protect local people.
“The PSNI and the gardai have been given this information, and I know for local residents it is an annoyance and a hindrance to their every day life, but the police and gardai cannot take this information lightly and dismiss it. Thankfully nothing has come to light in both occasions, but if a member of the public was injured by a device or something, we would have loss of life. So it is better to be cautious and to conduct an extensive search to ensure that no harm comes to anyone.”
Throughout both searches, people were not evacuated from their homes due to the vast search and local people were given access to their homes.
Local Sinn Fein Cllr Anthony Feely said ‘the number of unanswered questions keep growing.’
“It was disruptive for the locals in the area as the roads were closed. This situation has to be brought to a satisfactory conclusion and must not be allowed to linger on causing disruption and anguish to the local community.”
Superintendent Jane Humphries said: “Police responded to a report that a suspect device had been left in a wooded area in Cashel. A security operation was put in place to search the area on Monday, January 8th with the area closed whilst enquiries were conducted. Following a search of the area nothing untoward was found.”