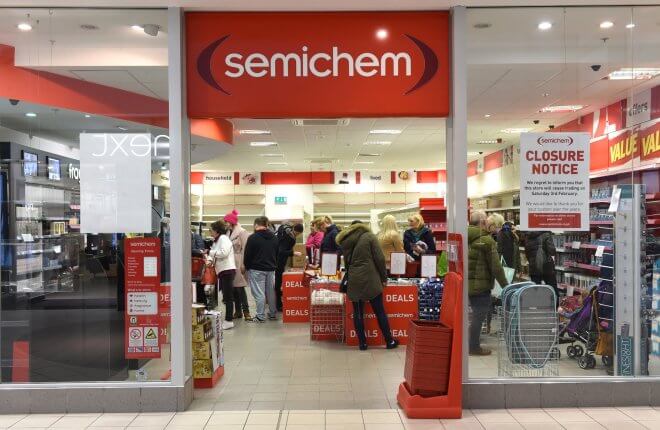 Semichem is closing next month.

ONE of Erneside Shopping Centre’s best known outlets is to close due to financial difficulties.
The Semichem unit is located at the Asda end of the shopping centre in Enniskillen.
The popular high street chemist will close at the beginning of February following a period of ‘financial difficulty.’
Just last week, the Herald reported that Frou- Frou and Pizza Hut have closed down while the long established McNulty’s Bike Shop on Belmore Street is also for sale. It has also emerged that Flo’s Restaurant has closed, making Semichem the fifth closure for the town in a short period of time.
A Semichem spokesman confirmed the closure saying: “The Semichem store in Enniskillen has been financially challenged for some time and the continued decline in footfall has unfortunately led to the decision to close the store.
“Over the past few years, we’ve looked at several options to try and turn the store around but unfortunately we’ve now ended up in the position where closure of the store is the only option available.”
Ten staff members are currently employed in the store, and Semichem is working on moving those employed to other stores.
“We’re still in discussions with the store’s 10 staff members, two full-time and eight part-time, with our first option being to transfer them to other stores in the area – these discussions are still ongoing. We would like to thank our staff and our customers for their continued loyalty over the years,” said the spokesperson.
Meanwhile, there are also fears for jobs at Tesco, as the supermarket giant has announced the cut of 1,700 staff members in a new management shake up. Although it has not yet been confirmed if the Enniskillen store will be impacted by the job loses.