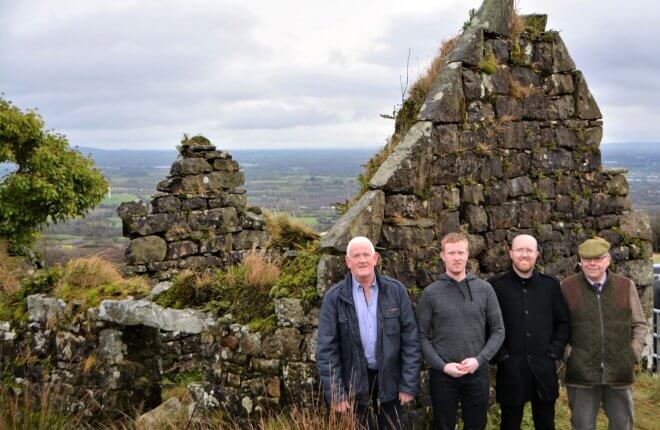 Fr Ultan McGoohan, along with landowner Hubert McCaffrey and his son Daire and Michael McBarron, Aughakillymaude Historical Society Chairman, pictured at the ruins of the Cox family homestead from where President KennedyÕs maternal great-grand mother, Rosemary Cox, emigrated to Boston

THE PEOPLE of Knockninny and Kinawley recently learned of their close connection to one of the most famous political figures of all time, 35th president of the United States, John Fitzgerald Kennedy.
While much is known about the Kennedy and Fitzgerald connections here in Ireland, much less is known about JFK’s Cox connection.
Until now, it was believed the president’s great-grandmother Rosanna Cox was a Cavan woman, but research by a local priest has revealed otherwise.
Fr Ultan McGoohan, priest in residence in Teemore, gave a talk at the Aughakillymaude Centre earlier this month in which he presented his findings that Rosanna was actually from the parish of Knockninny, with strong links to Kinawley too. What’s more, he believes there are likely descendants of the famous dynasty still living here in the area.
Rosanna was JFK’s mother’s grandmother. She married Thomas Fitzgerald and their son John Francis Fitzgerald became mayor of Boston. His daughter Rose married Joe Kennedy and the rest, they say, is history.
Fr McGoohan, who is director of pastrol services at the Kilmore Diocesan Centre in Cavan, said it had always just been “taken at face value” Rosanna was from Cavan, but this was a mistake due to parochial changes over time.
“The offical records state she came from the parish of Tomregan.
Tomregan would be what we’d now call the Ballyconnell area, but the parish of Tomregan was subdivided and a number of the townlands in Tomregan were moved into the parish of Knockninny,” he explained.
Fr McGoohan said he had records of the Cox family living in the Knockninny townland of Tullymore East, in the 1860s, and the ruins of the family home still exist.
Rosanna’s mother was called Mary McGovern and her father was Phillip Cox. Fr McGoohan said he’d found records of Phillip Cox being baptised in Kinawley in the 1830s.
The priest said while there were unfortunately some gaps in the records, “it all begins to link together.”
“There is a certain amount of the evidence that is circumstantial evidence, but I think it’s fairly accurate,” he said. “The official record state she came from Co Cavan, but that has never really been followed up on.
“All the focus, naturally enough, would’ve been on the Kennedy homestead in Dunganstown, and the Fitzgeralds came from Limerick.
So naturally, they are the two main sides of the family that were concentrated on.
It’s understanable as we’ve all got eight great-grandparents, so it would be a little bit much to expect all eight branches to be thoroughly researched and given equal weight.”
Fr McGoohan said his talk earlier this month was “not the last word” on the matter.
“It’s about putting the story out there, and it’s a call for information,” he said. “People may have information they don’t know they have.
There’s always the potential, once the discussion gets going, more will come to light.”