Advertisement
HomeSportGAAFermanagh too hot for Donegal in chilly Ballybofey
Advertisement 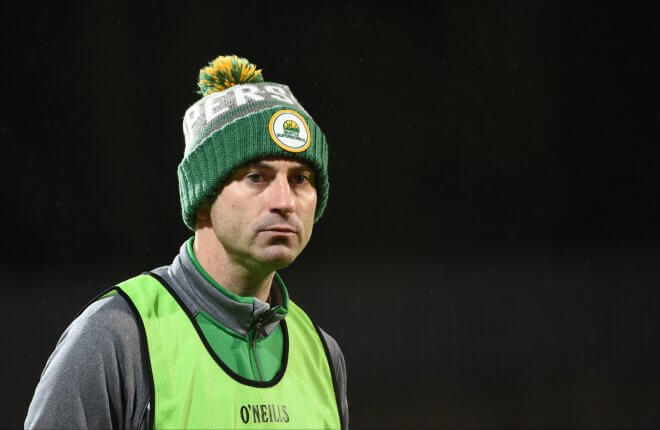 And so it’s three from three for Rory Gallagher’s Fermanagh, with two of those victories coming against division one opposition.

Donegal’s best spell came midway through the first half and it helped them to a 1-5 to 0-5 lead. However Fermanagh showed commendable determination and some good scoring economy in the second 35 to secure a well-merited victory.

Fermanagh had the better of the opening exchanges and were off the mark a minute in.

Conall Jones won a ball into the corner and worked it out to Aidan Breen. He hit Declan McCusker with good pass and the Ederney man slipped over well.

Play in the cold, foggy conditions was cagey, and when it came the next score went Fermanagh’s way too. It looked like it might be one which would swing the game in the Ernesiders favour as Padraig Hughes flashed black at Donegal talisman Odhran Mac Niallais for a foul on Eoin Donnelly. When Seamie Quigley pumped over a superb free from 47 metres everything was coming up roses for Gallagher’s men.

Unfortunately, Mac Niallais’s replacement, Jamie Brennan was to go a considerable way to unravelling all that early good work.

Donegal got off the mark after 13 minutes when Caolan Ward fouled for a tricky free out on the right. Niall O’Donnell did well to steer his shot just inside the right upright

Then from the kick out good pressure from Donegal saw them turn over posession and work the ball to Ciaran McGinley who guided over from left.

That first lost kick out was harbinger of things to come as for a ten minute spell Donegal won four Fermanagh restarts in succession.

The next turn over on the kick out in the 19th minute was the most costly. Donegal raked through the cover and Tony McClenaghan, with the goal at his mercy, generously passed across the face of goals to Jamie Brennan. The Bundoran man netted despite best efforts of Pat Cadden.

Two minutes later Brennan fisted over after skinning his marker. Then he made it 1-2 in the space of four minutes by blasting over a fine shot from the right.

The next play saw Cadden’s kick out again ending up in Donegal hands with Niall O’Donnell slipping over neatly to put five between them.

It could have been eight shortly after. Pat Cadden was smart to get out quick to close down Nathan Mullins, but the St Vincent’s man got his shot away and it took an outstretched leg from Che Cullen to clear off line.

Being comfortably ahead, Donegal took the foot off the gas a bit before half time and the visitors took the opportunity to claw back some of the deficit.

Then Stephen McGonigle did well to block out an Eoin Donnelly shot on goal. Seamie Quigley slammed over an immaculately struck 45 to leave a goal between them at the break

Fermanagh picked up where they left off in the second half, Seamie Quigley hammering over long range free to put two between the sides.

Then Ryan Lyons did really well to turn over Mark Anthony McGinley’s kick out and hit Declan McCusker in space with his pass. The St Joseph’s ace made no mistake from 30 metres.

Donegal edged away again five minutes into the half when Niall O’Donnell sent over a fine right foot free from an acute angle on the right.

Fermanagh kept in the hunt though with Barry Mulrone pointing after being well picked out by Declan McCusker.

Then after 43 minutes it was a level game. Again it was good work from Ryan Lyons to turn the Donegal kick out. The Belleek man switched the ball to Eoin Donnelly who sent over the equaliser, 1-6 to 0-9.

Donegal responded promptly though with Stephen McBrearty hoisting over a fine score.

However Fermanagh hit back hard themselves. There was 47 minutes on the clock when Paul McCusker sent an inviting long ball in from the right and Seamie Quigley flicked the ball deftly past the advancing Mark Anthony McGinley. One Roslea followers will be most familiar with.

Quigley was doing damage again shortly after, pointing from close range free after being fouled himself.

Stephen McBrearty cut the margin between the sides back to a goal when he put air under a good shot from a central position.

However that was quickly cancelled out with a stylish Fermanagh effort. Aidan Breen caught a long kick out from Pat Cadden over the top of midfield and one twoed with Ruairí Corrigan before sending over a lovely shot.

With 11 minutes to play Eoin Donnelly could have put the game away as he broke through clear on goal, but he contrived to put his shot wide.

Up the other end Niall O’Donnell punished that profligacy, sending over another quality shot as Donegal continued to threaten.

Seamie Quigley put four points between them with a free from distance out on the out on the right with five to play.

However when Hugh McFadden pointed with two minutes to go after good patience from Donegal the game was still up for grabs.

The final stages were very scrappy, but Fermanagh made good intelligent use of the ball in the four minutes of added time to seal the victory.