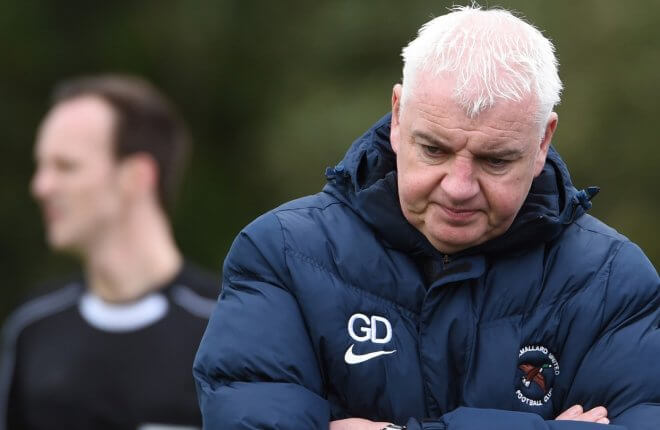 Of all of Ballinamallard’s festive fixtures, probably the visit of Crusaders to Ferney Park was the one bearing the least weight of expectation.
It went as per the form book, although Ballinamallard did make their Crues sing for their supper, holding them scoreless in the first half.
The loss of newly recruited defender Ryan O’Reilly at the break upset the host’s balance, but it took a magnificent strike from Jordan Forsythe to send Stephen Baxter’s men on their way.
“I thought we did well in the first half,” said Mallards boss Gavin Dykes. “Richard Brush made some good saves, we were compact and had a few chances ourselves. We were unfortunate to lose Ryan O’Reilly at half-time, his groin tightened up, which is going to happen, he hasn’t played a lot of football.
“That meant we had to make a change and bring James McKenna on. We didn’t really want to use him. He’d played Boxing Day for 90 minutes, he was outstanding against Carrick on Friday and we’ve been trying to mind him. We knew he would be leggy, we didn’t want to risk him and that upset us a wee bit.
“They scored a wonder-goal six minutes into the second half and we were up against it then. The second was an OG and then Burns scores a fantastic one from outside the box. When you playing against quality and what I would regard as the best team in the country it’s just difficult.”
The defeat draws the curtain down on a festive period which brought little cheer. Defeats to Ards, Dungannon and Crusaders were only partially lightened by a Josh McIlwaine leveller to snatch a point against Carrick.
“I’d be the first to say if someone was to say me at the start of the season we’d be bottom of the table and five points adrift I wouldn’t have been happy,” said Dykes. “We’ve had a disappointing 2017, I’m delighted to see it gone. I’m looking forward to the second half of the season. I think we’ve a group of players who have shown in the last few weeks that they are coming into a bit of form. Confidence is improving, we’ve added a few players and we now we need a big second half of the season.”
That begins with a cup clash against west Belfast intermediate outfit Immaculata in Ferney Park this weekend.
“We’re looking forward to this cup game,” said Dykes. “It’s a massive game this Saturday. Any time you go into a cup competition you’re going into it for one reason, to try and win it. I’m a great believer that anyone can win a cup. I was lucky enough to win a cup myself.
“I want to get the result. We won’t treat them lightly. Hopefully we’ll get the chance to get a look at a few of the new guys and see what sort of shape they’re in. But we’ll be taking it seriously, it’s a serious match for us.
“We’ll not be taking anything for granted against Immaculata. They’ll be coming down here fancying their chances. We have our homework done on them. We’ll treat them with great respect, but hopefully we will make it through to the next round and that gives us momentum going into a massive game the following weekend against Glentoran.”
As well as adding Ryan O’Reilly and Sean Noble to the Mallards squad, Dykes has confirmed the signing of young Crusaders defender Micheal Kerr as well as bringing back experienced striker Stephen O’Flynn. The Ducks supremo is also looking to do further business as he attempts to build a squad capable of keeping Premiership football in Fermanagh.
“He’s something different,” said the Dykes of O’Flynn. “He’s big and strong, probably not as mobile as some of other forwards we have and we can go more direct with him. He can hold up the ball and I think we’ve been lacking a wee bit of that.
“I know Noble from Carrick, he’s direct, pacey, scores goals. I not finished there either and I hope that by the end of the week we might have a few more.
“Great credit to the club, they’ve come to me and said we’ve got some money, it’s not huge money, but it’s money put together by people who want to put in a few pound to try and help. They players we’ve brought in will definitely help us and hopefully we will strengthen further towards the end of the week.”