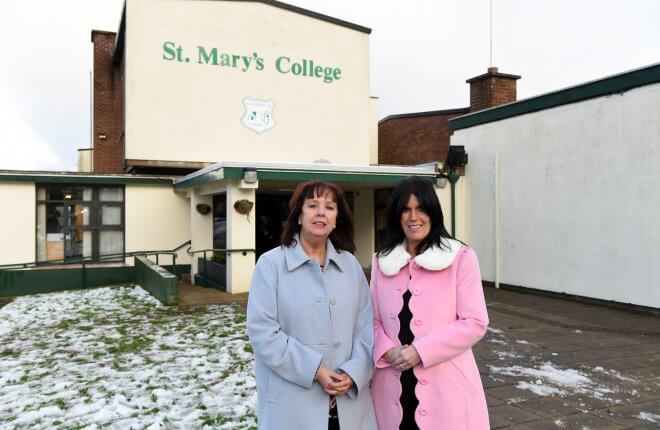 IT WAS an emotional day at St Mary’s College in Irvinestown on Monday as staff and pupils bid a fond farewell to Principal Patricia Cooney and long-serving teacher Teresa O’Donnell after almost 40 years of combined service.
Both women will be sadly missed but are wished great joy by all at St Mary’s as they embark on the next chapter of their lives.
For Patricia it’s the end of a ten year tenure as the head of St Mary’s and she is moving on to a new role within the Education Authority. Before that Patricia was based at St Mary’s Grammar School in Magherafelt and during her time in Irvinestown she took a two year secondment to work with the Education and Training Inspectorate. The school’s former acting principal Anne Flanagan will take over the reins permanently in January.
“I have very mixed emotions about leaving St Mary’s which has such a beautiful community and where everyone looks out for one another,” Patricia told the Herald this week. “What I’ll miss most is the conversation with the parent on the doorstep as I won’t be as hands on with schools anymore.”
Having dedicated her life to teaching Maths, Teresa O’Donnell officially retired on December 1st after a 39 year career, 27 of which were spent in Irvinestown. She also had brief stints at Derry’s St Columb’s College and St Eugene’s in Roslea. Teresa is stepping down at the same time as her twin sister, Mary Gormley, who also teaches Maths at the Sacred Heart College in Omagh.
She said: “The time was right as I want to spent more time with my family but it was an agonising decision as I really enjoyed teaching. One of my sons Patrick is in Scotland while his brother Ruairi is based in Australia. I loved teaching and St Mary’s in particular as the people there are like family to me. Between the staff and pupils and their parents, there is a great community and I’ve made friends for life. I will miss everyone but I’m looking forward to this next stage and to enjoy a bit of freedom.”
To give thanks for the wonderful service of both women over their time working at St. Mary’s, a Celebration Mass was held on Monday afternoon in the Sacred Heart Chapel conducted by Canon Michael McGourty, PP Irvinestown and Fr Frank McManus, PP Ederney, followed by light refreshments in the school afterwards.