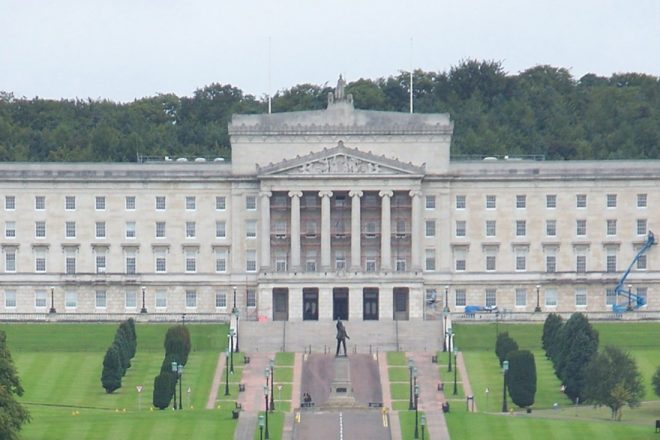 FERMANAGH’s five MLAs may have to tighten their belts in the New Year as they face a £13,600 salary cut if Stormont is not restored.
Secretary of State James Brokenshire has been urged to impose the pay slash by the Assembly’s former clerk and chief executive of the Assembly Trevor Reaney.
This would impact on local MLAs DUP leader Arlene Foster; Sinn Fein’s Jemma Dolan, Colm Gildernew and Sean Lynch and Rosemary Barton of the UUP.
They are among 90 MLAs elected in March who still continue to receive their full salary of £49,500 per year plus expenses, believed to average out at several thousand pounds, for a wide range of services including constituency office rent and staff.
In the absence of a functioning Executive since January, Mr Reaney has recommended that MLAs’ annual salaries be reduced in two stages with an immediate £7,425 (15%) cut to £42,075, followed by a further 12.5% reduction three months later – an additional decrease of £6,187.
In total, MLAs would see their pay slashed by £13,612 – from £49,500 to £35,888 with future annual pay increases also deferred until Stormont is back in operation.
Also included in Mr Reaney’s 18 proposals is reducing MLA staff allowances in the future.
The Fermanagh Herald contacted all the local MLAs last week for their reaction to the plan.
A spokesman for Mrs Foster said: “MLAs should have no role in setting their pay and allowances. If there’s no prospect of devolution returning then it’s inevitable that this will need to be considered.”
An Ulster Unionist Party spokesman expressed concern at the proposal to cut office expenses available to pay staff.
“Through no fault of their own they are going to suffer due to Sinn Fein and the DUP’s inability to form a stable government. It’s time for the Secretary of State to take the bull by the horns and put a deadline on the present format of the so called ‘talks process’,” the UUP added.
Sinn Fein say they have stated in a submission to Mr Reaney as part of his review that “if the Assembly is not re-established in the short term, then we are firmly of the view that the current arrangements needed to be reviewed.”