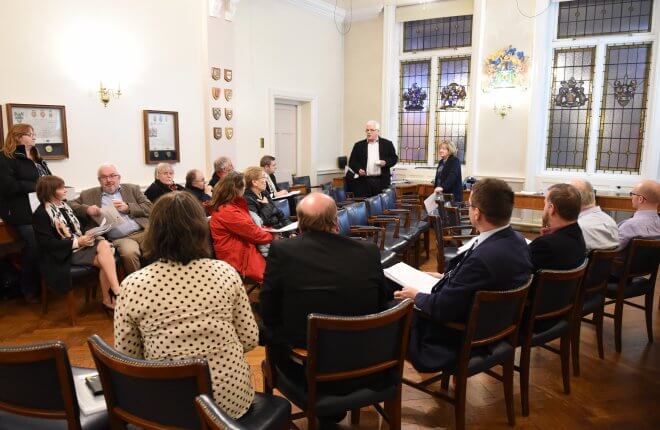 THERE have been calls for the Department of Health to schedule a new public meeting on the future of medical imaging at SWAH after a mass walkout at last week’s event at the Town Hall.
Last Thursday night, December 14, the Department held a public consultation event at Enniskillen Townhall on its current review into imaging services across the North.
However, there has been anger locally that little notice was given ahead of the event, with many in the area unaware it was even taking place.
Padraig Murphy from Fermanagh Save Our Services (SOS) was one of those who attended the meeting. He said all but one member of the public who was there had walked out of the event in protest at the short notice, and the size of the venue booked.
“Only for the Fermanagh Herald no members of the public may have known about it at all,” said Mr Murphy, referring to the article published in this paper the day prior to the meeting.
Calling the event “a sham consultation” Mr Murphy said Thursday night’s event was a repeat of the fiasco at the Lakeland Forum earlier this year when another public health meeting had to be rescheduled after hundreds more people turned out that could be accommodated in the room booked.
“This was repeat on what was done that Thursday night at the Forum,” he said. “All of those bodies are aware of the interest of the public in Fermanagh. Instead of welcoming that and encouraging that throughout Northern Ireland they’re doing the very opposite.”
Mr Murphy said the Department had said they would consider rearranging another public meeting in Fermanagh prior to the closing date of for the public consultation process on January 12. The Herald has requested confirmation of this event but at the time of going to print no details had been received. We will publish any further information on any potential second meeting both in print and online.
The Department have previously stated current review into medical imaging, including MRI and x-ray services, was looking at improving such services across the North by creating “regional hubs.” However there are local concerns that, despite reassurances from the Department, the wording of the review hints that such services may not be retained on a 24-hour basis at SWAH.

Covid crisis claims another casualty on the High Street