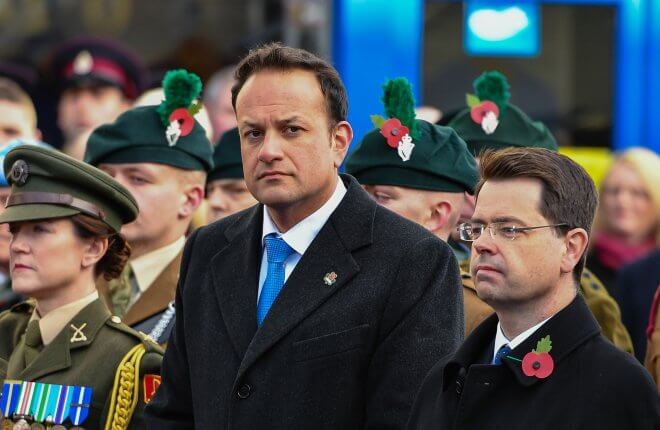 Taoiseach Leo Varadkar with Secretary of State James Brokenshire at the Remembrance Sunday ceremony in Enniskillen.


The Taoiseach says he remains hopeful that a deal can be reached between the DUP and Sinn Fein towards restoring devolution.
Leo Varadkar made his remarks in Enniskillen on Sunday where he discussed the current political impasse with Secretary of State James Brokenshire and DUP leader Arlene Foster.
The two parties have so far failed to reach agreement despite numerous rounds of discussions since the March Assembly election. Sinn Fein’s Irish Language Act demand remains one of the main stumbling blocks in negotiations to restore the Executive.
Mr Varadkar said: “It is my firm view that it is possible to come to an agreement to re-establish the Assembly and get devolution working again. The gap between the parties in terms of substance is not huge. It’s really a matter of political willingness and trust.”
Mr Brokenshire also said in Enniskillen on Sunday that Westminster does not want a shift back to direct rule.
Referring to the budget bill he was due to announce on Monday, he said: “This should be no bar to continuing discussions between the parties. We must remain firmly focused on getting devolution restored and seeing locally elected politicians getting on with the job of serving the people.”
DUP leader Arlene Foster told the Herald that her party stands ready to re-establish an Executive.
“Sinn Fein continue to block this through a shopping list of demands and preconditions. This impacts upon health, education, the economy and our infrastructure developments which are suffering, as key decisions cannot be taken,” she said.
Local Sinn Fein MLA Sean Lynch has said that the current situation is “unsustainable”.
“Rights and equality issues don’t go away and they must be dealt with. We are long past the time for delivery of them. Government built on poor foundations will continually fall. Commitment to deliver outstanding rights will ensure that a strong foundation for our society is created. Sinn Fein will re-enter government if this is agreed.”