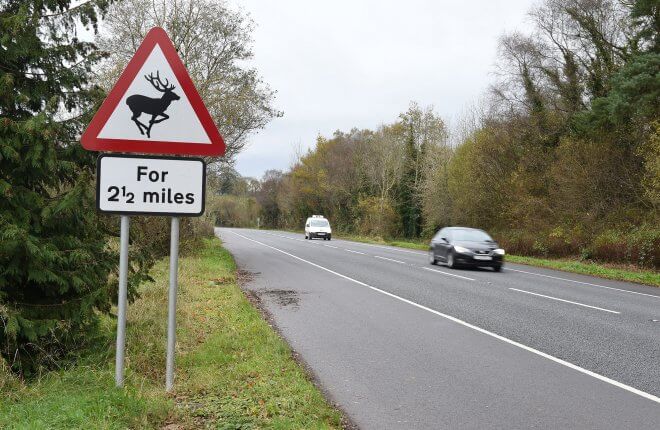 The A4 Belfast road at Brookeborough

THE latest fatality on the A4 Belfast Road has prompted calls for more safety measures to be introduced along the route.
Twenty-nine-year-old Kiara McCoy from Lisnaskea was killed in a two-vehicle road traffic collision at Brookeborough last month. She was the eighth person to lose their life on the A4 Enniskillen to Fivemiletown route in the last six years.
While the circumstances of that crash are still under investigation, the tragedy has prompted Herald readers to appeal for more signage along the route. In particular ongoing concerns have been raised about the number of deer crossing the path of drivers.
Local Sinn Fein councillor Sheamus Greene told the Herald: “There is a noticeable increase in the number of deer running across the road and we need signs up before there is a fatality. There isn’t a week that goes by when a motorist hasn’t had a near miss and their cars grazed by running deer. It’s a huge problem around Brookeborough.”
Frederick Parkinson, who lives in the area, is among those calling for action: “Signs for deers need to be erected between Brookeborough and Maguiresbridge. Every two weeks a deer is killed on the A4 outside Brookeborough and has caused many accidents. People need to be more aware of hazards in this area.”
His call is backed by local woman Joan Phair who also wants to see signs erected as far as Lisbellaw too where she has hit deer in the past.
Responding to concerns, a Department for Infrastructure, spokesperson said: “Warning signs are used to alert drivers to potential dangers on the road ahead. They indicate a need for special caution by road users and to be most effective they should be used sparingly.
“Signs warning of wild animals likely to be on the road ahead have been erected on some of our high speed trunk roads whenever police have been able to identify this as a major contributory factor in the collision history for that section of road.
“The recent collision on the A4 Enniskillen to Fivemiletown road is still under investigation by the PSNI. If they raise any areas of concern relating to the need for further warning signs the Department will address this issue.”