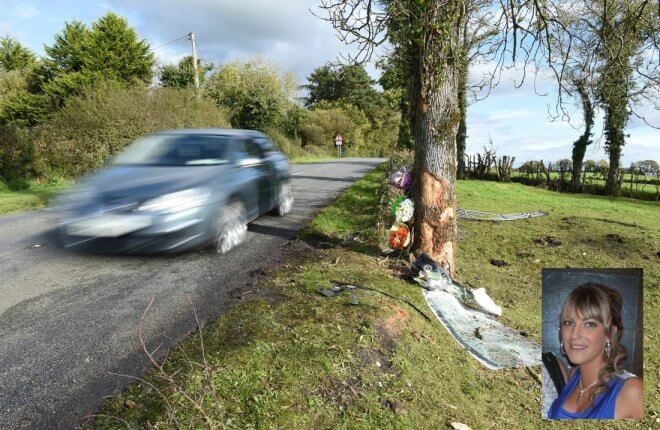 The scene of a fatal RTC on the Newbridge Road, Derrylin which claimed the life of Natasha Carruthers (inset)

TRIBUTES have been paid to the young mother-of-one killed in a horrific crash near Derrylin at the weekend.
Natasha Carruthers (23), from Letterbreen, was the front passenger in a blue Vauxhall Corsa, accompanied by two friends, which hit a tree on the main Derrylin to Lisnaskea road shortly before midnight on Saturday. She died at the scene of the one vehicle crash, about one mile from Derrylin, in the townland of Leginn.
The 21-year-old male driver of the car was seriously injured and underwent surgery at the Royal Victoria Hospital in Belfast on Monday while the female back seat passenger, also in her 20s, was also being treated in hospital for serious injuries.
An eyewitness who came upon the crash scene told the Herald : “I heard a bang just before 12 and found the horrific scene. I phoned 999 and the emergency services arrived very promptly. Unfortunately in the past 20 years around seven people have lost their lives on this road but where this crash happened is not an accident blackspot.”
Natasha is survived by her one-year-old daughter Lily-Rose, parents Jill and Mervyn and sister Julie.
Family members have paid tribute to her this week, remembering her as “a beautiful angel”.
Her cousin Diane Doogan said: “Natasha was a real animal lover, had a lot of dogs and volunteered at Bright Eyes Animal Sanctuary. She was very unique, outgoing and someone who was always there for her family.
“She lived for her family and was a very proud mother to her baby girl who now has a beautiful angel to watch over her. I cannot believe Natasha has been taken from us so suddenly – everyone is in shock. It’s not fair and life is so cruel.”
Matthew Taggart, the father of little Lily-Rose, also paid tribute to Natasha on social media: “I need to be strong for our little girl. She will grow up to know you always loved her and you never stopped loving her. It breaks my heart that this has happened and I will cherish our memories from the day we met. We will always be a family no matter what.”
Natasha was a past pupil of Devenish College and principal Simon Mowbray told the Herald that the school community was “devastated” to hear of her very sad passing.
“Natasha attended Devenish College between 2005 and 2010. She was a very popular and spirited pupil who was very well liked by her teachers and peers. It is always so tragic when someone so young loses their life in such heart-breaking circumstances,” he said.
Natasha’s funeral service takes place at 1.30pm this afternoon (Wednesday) at Rossorry Parish Church, Enniskillen followed by burial at the adjoining churchyard.
Canon Ian Ellis, Rector of Rossorry Parish, said Natasha’s family had been left “totally stunned by the terrible news that she lost her life in a tragic road traffic accident”.
He added: “They received that news from the PSNI in the early hours of Sunday morning and are still in great shock and trying to come to terms with this reality which is every parent’s worst nightmare.”
Meanwhile investigations are continuing into Saturday’s crash. PSNI Inspector Marie Stinton said: “Anyone who witnessed the collision or who may have information that could assist the investigation is asked to contact the Collision Investigation Unit by calling 101.”