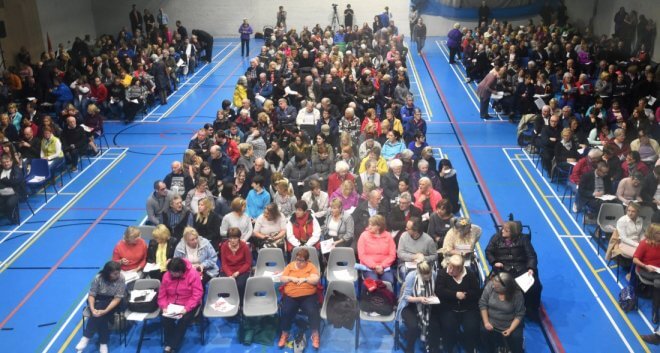 Some of the large crowd who showed up for the Western Trust public consultation meeting in Enniskillen last night.

It was standing room only at the Lakeland Forum in Enniskillen last night, when hundreds turned out to voice their concerns over the Western Trust’s proposed £12.5 million health cuts.

The public consultation meeting had been originally planned for last Thursday night but had to be called off when the room the Trust had originally booked at the Forum was much too small for the crowd that showed up. Having rearranged the meeting with just a few days notice, the people of Fermanagh came out in force again last night. The meeting was this time held in the large hall, which held over 600 people seated and was packed beyond capacity.

In what was a passionate, at times heated, and often emotional meeting, over 50 speakers had their say on why the Western Trust should not make the planned cuts to SWAH’s neonatal unit and elderly units, among a swathe of other proposed cuts to the local health service. These speakers, all members of the public, included former patients and families of patients, doctors and consultants, midwives, and nurses from the neonatal unit itself.

The Western Trust vowed to take all views on board when making their decisions, which will be announced at another public meeting in the Foyle Arena in Derry on October 13.

Those who could not make last night’s meeting and would like to have their say can visit the ‘consultations’ section of Western Trust website www.westerntrust.hscni.net. Deadline for submissions is this Thursday, October 5.