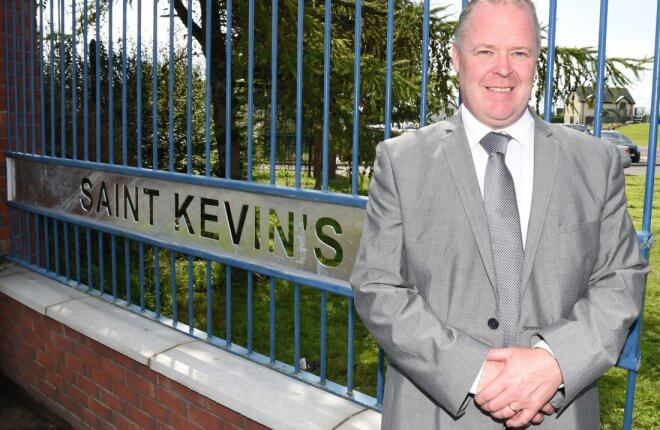 THE doors of Fermanagh’s newest school, St Kevin’s College, have opened and the intake for this year is over 600 students, which places the school as one of the biggest in the county.
Principal of St Kevin’s College, Gary Kelly is delighted with the amalgamation, and told the Herald: “We are over the starting line! Everyone seems very happy and content and there is a great atmosphere around the school, both from pupils and the staff. Two schools joining together is obviously a momentous occasion for the area. We have students coming from lots of other schools too, so kids are coming from six or seven schools – not just two.”
St Kevin’s is an amalgamation of St Comhghall’s, Lisnaskea and St Eugene’s Roslea, and has a new uniform, new teacher offices and even new starting times as both schools aim for a fresh start.
The school also has five newly built classrooms on site to accommodate the increase in the number of students, and has an application in for a £4 million extension.
“The new uniform looks fantastic and the pupils seem to be very happy with it. We have a new starting time, starting earlier in the morning time, and have a slightly later finishing time and we also have a new period in the school day too.” said Mr Kelly.   St Eugene’s closed its doors in June, with students and staff moving to the Lisnaskea site of St Kevin’s. Over the past year, both schools have been working together to ensure that the amalgamation runs smoothly.
“We have been very lucky – we haven’t hit the bumps in the road yet. We have had a phased amalgamation, so it is an ideal system. The reception from the St Eugene’s staff, students, governors and community has been very positive, as had St Comhghall’s. The last thing we have to do is put the new signs on the school, and after that, it is business as usual.”
“It is a work in progress. Joining two very successful school, we can only hope for a bigger success,” concluded Mr Kelly.