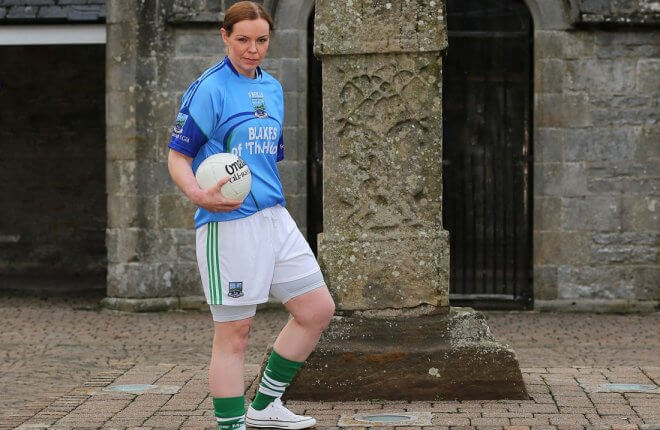 Talking to a relaxed Fermanagh goalkeeper Roisin Gleeson this week ahead of an all-Ireland semi-final you soon realise that the Erne County are no strangers to Croke Park.
A win over a hotly tipped London on Sunday will put Fermanagh into a third all-Ireland final in eight years, a stunning statistic that Erne supporters should be proud off. But this is ladies football and there are those who still overlook such facts, that should change this weekend.
Despite being just 29 Gleeson is a veteran in this youthful squad. In goalkeeping years she’s still a youngster, but the Donagh custodian has been involved with the county senior set up for over a decade. Heartbreak on two occasions so far at Croke Park in the intermediate grade, two semi-final loses too, but ahead of a first all Ireland junior semi-final she feeling upbeat.
“Two wins, two defeats, but we are determined to win this Sunday,” said Gleeson.

Any player who has played at Croke Park or indeed have played in so many semi-finals and finals will have garnered plenty of big match experience and that experience of big days at headquarters could well be vital for Fermanagh ahead of Sunday’s tie.

Advertisement
A scan over the Erne player profiles shows a raft of teenagers, but as the goalkeeper explains there’s no fear about them.
The 2017 league and championship campaign has been one of recovery and rebuilding for Fermanagh. The county were unlucky not to reach a league final in the spring. Re-grading to junior championship football was the correct decision to give the squad time to find their feet once again.
“It was a big call for sure, I know there were players who were not happy and left the scene, but after last year it was the only way for us, we have enjoyed playing football this year again. It has been a good journey and we want it to continue but we are well aware of what we need to do against London to get back to Croke Park.”
There is an excellent mix of youth and experience in this current Fermanagh squad.
They have worked extremely hard this season and Gleeson has been impressed by the distance the squad has travelled in such a short period of time.
“It would be fair to say that Emmett Curry, Mickey Cadden and Josie Boyle have done great work and the girls bought into what was being asked of them.
“We have players who want to play now and players who are capable of playing at the highest level. That is a boost for Fermanagh football and there really is a competition for places, that makes a difference to us all.”
Fermanagh enjoyed big wins over Derry and Antrim in the group stages of the all-Ireland junior series. Gleeson admits that 2017 was always going to be about improvement and the evolution of new players.
“This is bonus territory for us. When you compare what happened last year the only way was up. We are in a good place now and we are well prepared for this semi-final, we are really looking forward to the game with London, but we won’t be happy to end the journey on Sunday.”
Fermanagh head into the game with the county finals played and with no major injury issues as they tackle the Exiles, a London side with at least one familiar name in the line up.
Naoimhin Daly, part of the successful Erne team which reached the 2014 intermediate All-Ireland final is likely to start at corner forward alongside the vastly experienced Fiona Morrissey and Clodagh Brennan while Lisa Cafferkey scored 5-14 last week in the British final.
Former Tyrone stalwart Catriona McGahan, goalkeeper Marie Kelly and full back Catherine Connolly leave the Exiles as favourites to progress, but that will not worry manager Emmett Curry, he’s well used to underdog status. He and his charges wouldn’t want it any other way.