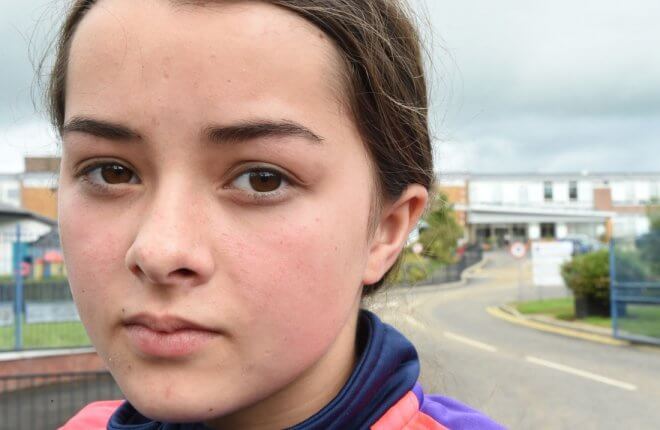 A 13-year-old student at St Kevin’s College in Lisnaskea has been suspended for wearing a nose piercing to school.
Year 10 student, Aoife McCabe from Newtownbutler has been suspended from school since Monday until she removes the piercing.
Aoife got her nose pierced two weeks before the end of the school year, and started school last week with a nose stud. When questioned by teachers about the piercing, Aoife removed the stud and replaced it with a clear, plastic retainer.
Her angered mother Patricia Boyle told the Herald: “Aoife started school with a stud piercing but she was pulled up on it. I then got her a retainer, and she started to wear it on Wednesday, and she was pulled up by teachers for wearing the retainer which is a small, soft, clear plastic bar.
“I met with the vice-principal on Friday morning and it had to be pointed out to her that Aoife was wearing the retainer, because it is so small and could hardly be seen. On Friday evening, she was suspended until she completely removes the nose piercing. I think this is ridiculous as the retainer is tiny.”
Aoife has been suspended since Monday of this week, September 11th and the suspension continues until she completely removes the piercing.
Speaking about the incident, St Kevin’s College principal Gary Kelly said: “We have a uniform policy for the school where nose piercing, eyebrow and lip piercing are not part of the policy.
“This girl has been given a week and a half to follow the policy, but unfortunately, the vice-principal has had to suspend her, but she is only suspended until the piercing is removed. Once the piercing is removed, the child can come back to school.
“We have a policy that we have to follow – It is well printed and published on our website, and in our homework diary. It is unfortunate this has reached the media, as we thought this could have been dealt with.”
But Patricia Boyle believes that the action against her daughter is unfair and has said “she will not be removing the piercing”.
“I respect the school body and the rules but this is ridiculous. The school keeps saying about how they want them to be individuals and express their personalities but when it isn’t the way they want it, they are not happy.
“Aoife has turned up at school respectable and tidy in her brand new uniform. I do not know how that little bit of plastic that is holding the hole open is stopping Aoife from learning,” concluded Patricia.