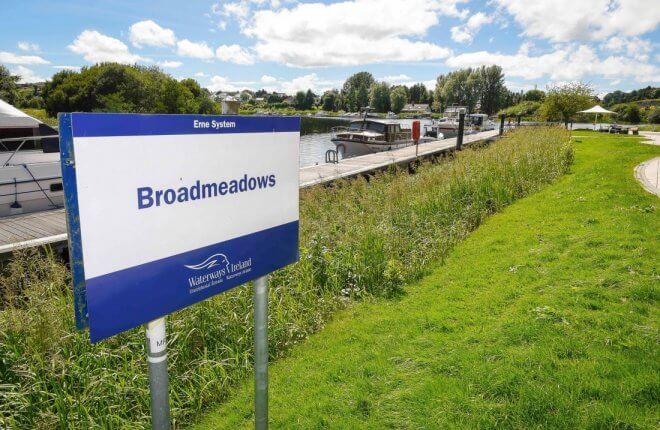 The sign, erected by Waterways Ireland, adjacent to the Lakeland Forum.

PLACENAMES have for a long time been a bone of contention for the people of Enniskillen.
Since the new Castle Basin Promendade was completed in 2015 at a cost of  £1.7 million, there have been numerous calls for the area to given its proper name, ‘The Broad Meadow’ and not ‘Broadmeadows’.
Now Waterways Ireland has said it would be prepared to review place name signs in Enniskillen in consultation with stakeholders and amend signs in due course, funding permitting.
An objector’s letter to the Herald this week, which included a map, said that a large expanse of land stretching from Enniskillen Castle and including the Lakeland Forum, the football and games areas, Fermanagh House, Ulsterbus and the car parks is called ‘The Broad Meadow’.
“This is what it has always been known as, not ‘Broadmeadows” as stated on the signs in the immediate vicinity of the Forum and elsewhere,” said the letter.
“There is no evidence that this area was ever called ‘Broadmeadows’. Why should a longstanding name be even slightly altered?
“In the interests of both accuracy and continuity we would respectfully ask that the name revert to the original, ie, ‘The Broad Meadow’,” the letter writer continued.
The sign, erected by Waterways Ireland, adjacent to the Lakeland Forum, uses ‘Broadmeadows’ and it is understood that that name was also used by the Rivers Agency in the past.
Fred Ternan of Lough Erne Heritage insists the area was always known as the Broad Meadow.
“Someone has put an ‘s’ on the end of it and I don’t know why. It’s not correct and that’s the height of it.
“When we live in an historic town we should try to keep our facts right about it. Otherwise if things like this are tweaked then we could lose the whole story eventually,” he said.
“If we don’t stick to the facts then some of the past is going to be missed eventually. Nobody will really know what the true story is. Things do get corrupt over the years so it is important that original names are kept,” he said.
Waterways Ireland has also researched the name and in a statement it said, “Our research of the PRONI Historical Maps which are viewable online   (https://www.nidirect.gov.uk/services/search-proni-historical-maps-viewer) shows that the place name has varied over the years from Broadmeadow to Broadmeadows and Broad Meadow