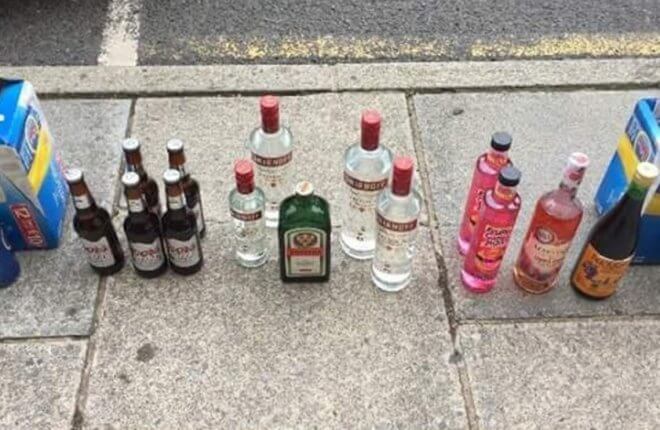 Some of the alcohol seized from youths in Lisnaskea

AS the summer holidays begin, the PSNI in Fermanagh have issued a stark warning to parents about the dangers of underage drinking.
The caution comes after community police officers seized a substantial quantity of alcohol from a group of young people who they say were are not the legal age to drink alcohol.
Police officers in Lisnaskea were on beat patrol on Friday afternoon when they came across the youths who were waiting to board a bus to a concert in Belfast.
When questioned about the alcohol, police say the youths denied all knowledge as to who owned it or where it had been purchased.
A PSNI spokesman said: “As a parent I would not want my child becoming vulnerable in anyway.  My job as a parent is to protect them from harm and our job as police officers is to do the very same.
“Please know what your child is doing; if you own an off licence, Challenge 21 should be at the forefront of your mind; as a coach operator/driver, help protect our children by not allowing this to happen on your vehicle; if you are buying alcohol for underage children, think what the consequences could be of a drunk child becoming the victim of crime!”
Meanwhile statistics show the PSNI seized alcohol from under-18s 1,161 times in the past two years. Under-18s were admitted to hospital on 655 occasions with alcohol-related conditions in the past five years.
The timely warning from police follows news that retailers in the North are the worst in the UK when it comes to asking for proof of age when selling alcohol. One in four teenage mystery shoppers were sold alcohol at pubs, bars and late night venues, supermarkets, convenience stores and petrol stations last year without being asked for proof of their age.