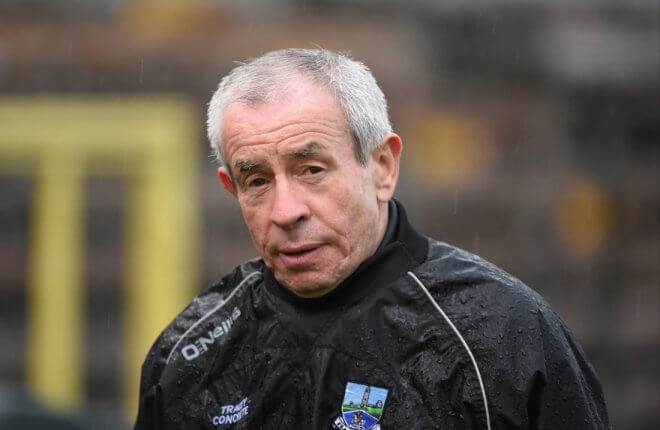 No white smoke just yet, but the signs are growing more positive that Pete McGrath is ready to sign up for another term as county manager.
Fermanagh’s year was brought to a close by Armagh just over a week ago and in the interim the management team convened to review the season and weight up options for 2018.
Undoubtedly 2017 has been particularly trying, with NFL relegation and a championship blank a poor return for the county’s endeavours. There were fears McGrath was considering drawing a line under his time with the Ernesiders. But speaking to the Fermanagh Herald yesterday (Tuesday), the Down man signalled he might not be done just yet.
“The management met last week and we talked about a lot of things,” said McGrath. “There was a lot of positivity. There was no final decision taken, it’s not something you rush madly into, needless to say. But we felt there was still a job to be finished, a job to be done. We felt the potential was still there in the team, particularly if we could get back a number of the players we were missing for a good bit of the year through injury, unavailability and so on.
“The county committee would be aware of what we were thinking and I’m due to meet members of the county board later this week to map a way forward. That’s the way it is, it’s no further on than that. It is positive and people are thinking about a job to be finished rather than leaving something undone. That’s where we’re at the moment.”
McGrath would be the first to admit this season was far from ideal, describing it as an ‘annus horribilis’ in his post match comments at the Athletic Grounds. However he believes there are good grounds for optimism for the county in a season where they will be rebuilding from the third tier.
“We all know the issues we faced this year, the numbers game and the rest of it. We know we suffered a heart-breaking relegation on the last day of the National League and all that. You factor all these things in.
“As a management team we look at the potential of the players. We look at what the players have given us and what can be achieved. We consider if the management team has that desire, energy and ambition to go and push this thing even further.
“All that at our meeting was very upbeat and positive. That’s what we communicated to the county officers. I’m due to meet with them now this week to explore that ground.”
Another factor likely to play into McGrath’s final decision is the positivity which has surrounded his time in Fermanagh, with fans generally supportive of the direction he has taken the county in.
“You always factor in what the mood in the county is and if it is the case that a lot of Fermanagh people, supporters and so on were of the opinion that what has been done is positive and that there’s more to come that would obviously that would give us that confidence and feeling of support. We do realise there is a lot of good will out there and a lot good people backing us.”