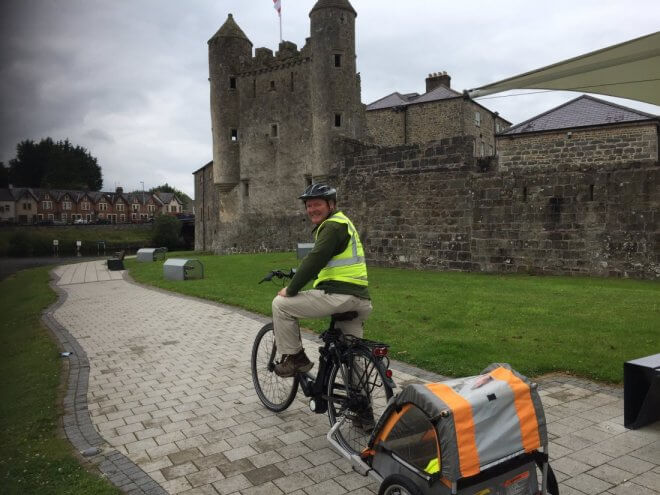 Seamus Gibbons on an eBike in Enniskillen

IT’S a phenomenon that’s sweeping across Europe, and now ‘eBikes’ have arrived in Enniskillen, just in time for the summer.

Leitrim couple Seamus and Eileen Gibbons have been pioneering the use of electric bikes (eBikes) in the north west for the past five years. This month they’ve ventured north of the border for the first time, establishing an eBike trail in Enniskillen as part of the new Waterways Ireland Blueway activity hub in the town.

“They are very simple and straight forward,” he said. “They are the same as an ordinary bike, just that they have a battery and a motor.

“You pedal all the time, but it’s only a matter of turning the pedals. You have seven or eight gears, and three levels of assistance. If you put it in low gear and with a high assistance, you’ll climb up any mountain.”

Seamus said eBikes were phenomenally popular in other hilly countries such as Germany and Sweden, and could be just as popular here. He explained they’d been selling bikes to workers who wanted to leave the car at home, including one man who commutes 20 miles each way to work on his.

“You have to just get it into your head, just turn the pedals and the bike will do it with you,” he said. “As we say, it levels out the hills.”

Seamus and Eileen, who run adventure holiday business Electric Bike Trails, came up with the idea of creating biking trails after a holiday to the Greenway in Mayo. Realising Leitrim had some very quiet roads, they now have an established network of dozens of routes and loops ranging from 15km to 60km around Leitrim, that is attracting tourists from across Ireland, Britain and beyond.

Having already worked with Waterways Ireland and the Blueway in Leitrim, Seamus said the new activity hub had the potential to be a huge tourist draw.

“They hub is fantastic,” he said. “It’s what you want in an area, to bring it everything together, and engage with businesses.

“It’s all about keeping people. What we’ve found, in Leitrim especially, the more you add on the longer people will stay.”