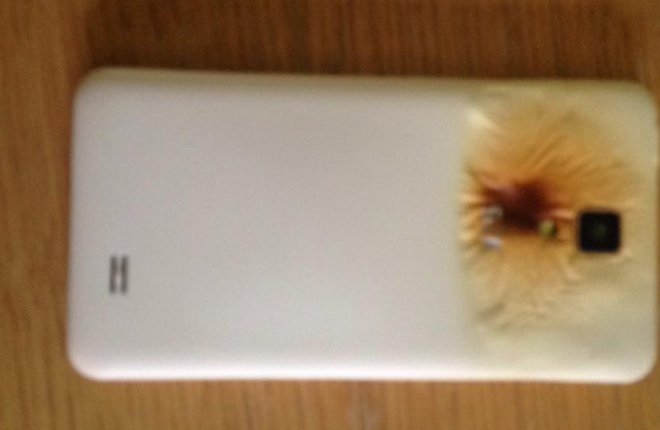 A phone was damaged when a charger almost went on fire

A MOTHER, whose son’s phone almost went on fire, has warned parents about children charging their phones in bed at night.
Sebastian Timlin from Tamlaght, woke up during the early hours of last Tuesday morning to the smell of smoke in his bedroom. The ten-year-old had been charging his new phone overnight, when the device overheated and almost went on fire. The phone was badly damaged – the cover was synged and had began to melt. Luckily, Sebastiann woke up in time and woke his eight year old brother who he shares a room with.
His mother, Gail spoke to the Herald in an attempt to make people aware of the danger of charging phones overnight.
“It was only a new phone that he was given as a present just weeks ago. He was in his room in bed, and the phone was on charging under his pillow. Luckily, he woke up in the middle of the night with the smell of burning. You would expect this to happen to a charger that has been damaged or something wrong with it but not to a brand new phone.”
When Sebastian woke up he acted quickly and bravely to disconnect the phone from the charger and alert his family. The phone had smouldered and was clearly burned but luckily no other damage had occurred.
Gail continued, “The phone was really hot, and you can see how it smouldered and nearly melted. The inside of the cover is now bumpy from where it had been melting from the heat. People need to really take heed. Do not charge your phone in your bedroom and do not charge them at night. Do it at a time that people are there.
“Everyone does it, but when something like this happens – it is very scary. I dread to think how bad this could have been if Sebastian had not woke up when he did,” she added.