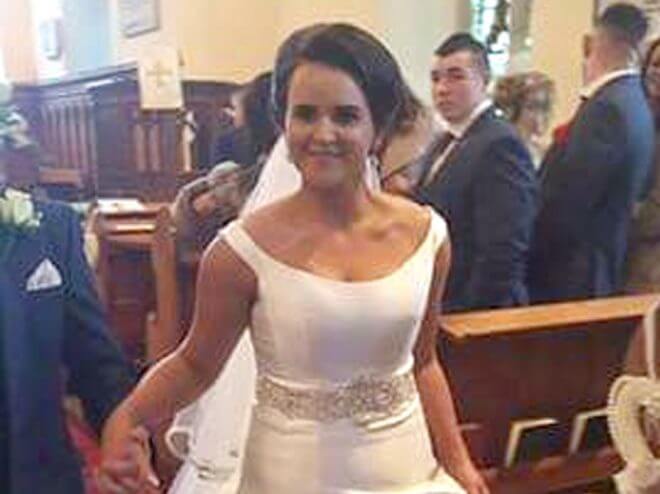 The funeral will take place this afternoon (Wednesday) of Amanda Kelly, a young newlywed and mother of one, who was killed after her car collided with a lorry near Clogher on Friday morning.
Mrs Kelly (née Little) died after her BMW was involved in a crash with the articulated lorry on the Ballagh Road between Fivemiletown and Clogher shortly after 6am. The male lorry driver was physically unhurt.
The 25-year-old from Corick Road in Augher, was on her way to work at Scott’s Bakery in Fivemiletown at the time. Her father Andrew and sister Nicole also work at the bakery. She had only married agricultural contractor Emmett Kelly last New Year’s Eve and the couple have a two year old son, Jack.
Amanda’s mother, Wendy (née McCusker), posted a picture on Facebook of her precious daughter walking down the aisle on her wedding day with the words: “Our beautiful girl, now in the arms of God.” She is also survived by her brothers Aaron, James and Alex, mother-in-law Siobhan, brother-in-law Dominic and sisters-in-law Grace and Davina.
In a further tribute, hundreds of people stood in silence in Fivemiletown on Saturday evening as a lone pipe played a lament for the popular local woman during Cavanaleck Pipe Band’s annual parade.
A former pupil of Fivemiletown College, Amanda’s funeral will be held later this morning at St John’s Parish Church in Fivemiletown at 1pm with interment afterwards in the adjoining Churchyard.
Speaking to the Herald, Rev Canon Kyle Hanlon said it was a tragedy which had shocked the entire community.
“It is absolutely devastating to lose a young person with her life ahead of her. It is clear from her many friends and relatives that she was a beautiful person. She was someone who was very generous, someone who had shown so much love, kindness and compassion during her life.
“This is a very difficult time for her family, she was just married at the end of last year and has a very young son. The many friends who have been calling to show their support, shows how much people thought of Amanda.”
UUP Cllr Victor Warrington said her death was a desperately sad loss of a young life.
“It’s devastating to see another young life taken. Sadly we hear of fatal accidents every day but it only hits home when it’s someone like Amanda who I knew all my life and was not much older than my own daughter.”
Police have urged witnesses to the collision or anyone who was travelling on the Ballagh Road on Friday morning and may be able to assist the investigation to contact them on 101.