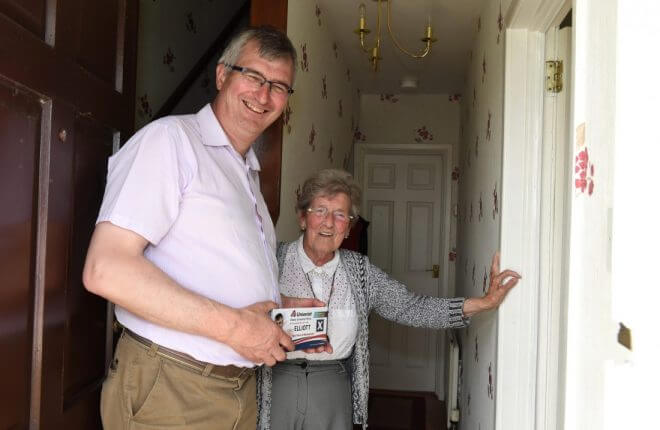 ULSTER Unionist Tom Elliott is in confident mood on the campaign trail despite being the self-styled ‘underdog’ as he wrestles to retain his Westminster seat from his Sinn Fein rival Michelle Gildernew.
Just as in 2015 when he unseated Ms Gildernew after 14 years, Mr Elliott again looks set to benefit from the DUP’s decision not to run a candidate here.
Despite concerns about voter apathy just two months after the Stormont poll, Mr Elliott says he hasn’t detected any sign of “election fatigue” on the doorsteps.
Knocking on doors and chatting with voters in Letterbreen, Mr Elliott told the Herald: “People are asking me why do we have to have another election but they haven’t said that because of that they’re not going to vote. However there is still huge frustration from people that the Executive isn’t up and running and nothing is happening in government.”
He says issues around the health service and local community groups struggling for funding are more common concerns among voters rather than Brexit.
“Brexit is certainly coming up among those in agriculture and business along the border but not so much in the other towns and villages. Businesses have broadly accepted that it’s going to happen but their main concern now is trying to get the best deal out of it.”
When it comes to tight polls, Mr Elliott fully expects Fermanagh South Tyrone to live up to its reputation once again next week. The constituency result was decided by a solitary vote in 2010 and just under 600 two years ago.
“It will be tight but looks that’s politics. I’m focused on getting on with the job and doing my best, having run a very positive campaign.”
Mr Elliott says that while he is frustrated that this election has been called after only two years in the job, he believes he has worked hard to represent this constituency since 2015.
In a dig at his Westminster rival Ms Gildernew, he said: “Two years ago, I pledged to be the MP for everyone and I believe my record confirms I have been able to live up to that. You can’t do that if you’re not physically there by not taking your seat. The reality is I’ve done quite a bit more in these past two years than my predecessor did in 14 years.”