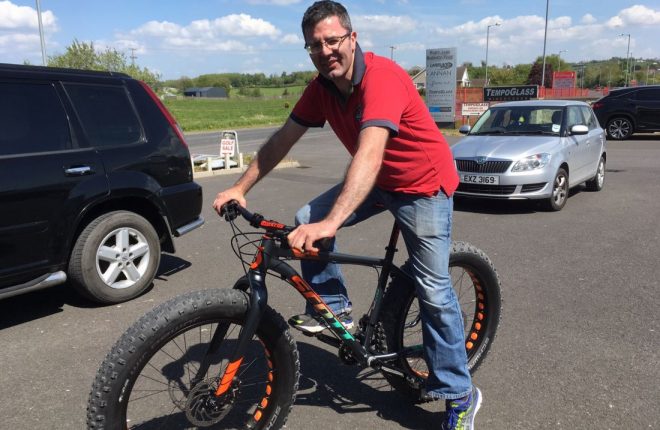 THIS MONTH is Stroke Awareness month and a young Enniskillen stroke survivor is calling for greater awareness of the impact of the condition on younger people.
Raymond Dunlop (35), who works at Lakeland Bikes in Enniskillen, had a serious stroke in September 2016 while taking part in an adventure race in Donegal. Now he is backing the Stroke Association’s Make May Purple campaign which aims to raise awareness of stroke.
Having already completed a gruelling run, cycle and kayak, Raymond was sprinting to the finish line at the popular Gartan Challenge Adventure race when he had a sudden pain in his neck and began to feel unwell. He dismissed his feelings as exhaustion after a tough race, and remarkably, not only completed the race but came first.
After the race, Raymond’s right arm went numb and he found it difficult to walk and talk. His finance Aoibheann rushed Raymond to the South West Acute Hospital where doctors discovered he was having a stroke, probably the result of a tear in his neck.
“Thinking back it’s a miracle I’m here. The doctors think that I may have ripped an artery in my neck during the race. This caused a blood clot to form which blocked the flow of blood and oxygen to my brain and caused the stroke. At the end of the race I was feeling disoriented and very tired but I just put that down to the adrenaline and exertion. I was always very fit and healthy and didn’t really realise that strokes could happen to younger people, until it happened to me. Losing my speech was really scary, and was three days before I could speak again but thankfully that improved,” said Raymond.
After a week in hospital, he continued his recovery at home and just a few weeks ago, doctors gave the keen cyclist the go ahead to head back out on the bike but sadly he won’t be able to race competitively.
Raymond said: “I’d be racing for 22 years. It has been such a big part of my life and I will definitely miss the buzz of taking part in races but I’m determined to live life to full after my stroke. I’m doing some training with Cycling Ireland to coach children interested in cycling and also volunteer with Lakeland Cycling Club every week helping with marshalling and results.”
Raymond is hoping that Stroke Association’s Make May Purple campaign will raise awareness that stroke can happen to anyone, at any time and any age. To get involved in Make May Purple visit www.stroke.og.uk