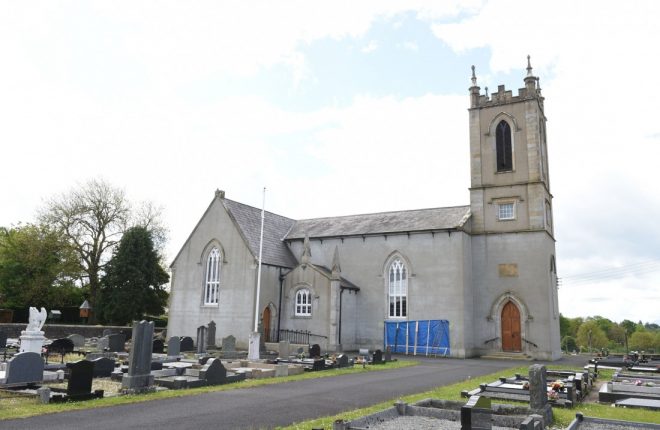 Graffiti on the wall of Derryvullan North Parish Church, Irvinestown

POLICE are appealing for information after a chilling message was painted on the side of a church in Irvinestown.
The message was discovered sprayed below windows on Derryvullan North Parish Church last Thursday morning.
Yellow paint splattered on the historic Church Street property read: “Our familys suffered, now it your turn. We told u we would get out some day.” The PSNI say they received a report of the graffiti daubed on St Tighernach’s shortly before 7.30am on Thursday last, 18th May. It is believed that it was sprayed on the church walls sometime overnight.
Kesh Rural Dean, Reverend Alan Irwin also condemned those responsible: “We can’t understand why the church was singled out and targeted in this way. We condemn the use of the building as a billboard for what appears to be some sort of a personal vendetta. It is very upsetting and distressing for the parishioners who don’t want this sort of attention and will want to have the graffiti removed as soon as possible.”
Ulster Unionist Tom Elliott slammed the “distasteful and disgraceful” act.
“Why anyone would damage a church in this way is beyond me but to paint such disgraceful slogans is not acceptable in any society. The entire community of Irvinestown would be totally opposed to this type of behaviour,” he told the Herald.
DUP Cllr Raymond Farrell added: “It disturbed me as it did for a great many to see this beautiful and sacred building daubed with graffiti. A church is a place of solace and comfort and to worship God as a body of believers. It saddens me to see such activity in Irvinestown.”
Detectives are appealing to anyone who has information about this incident to contact police at Enniskillen on 101.