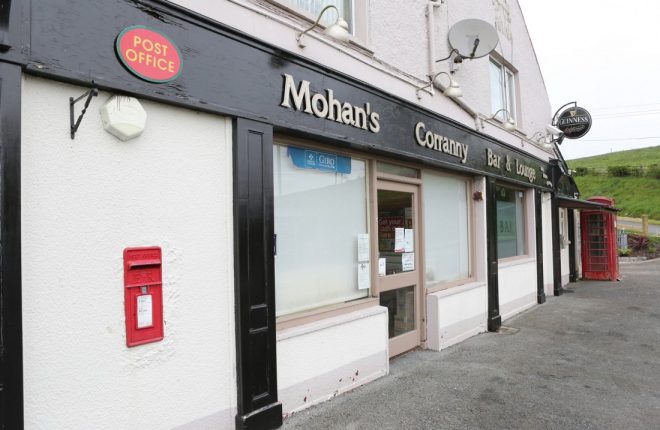 A 38-year-old man with 401 previous convictions has been sentenced to nine months in custody
for robbing a Fermanagh pub in two early morning raids.
Benny McCullagh of Main Street in Sixmilecross, Co Tyrone, was charged with burglary and criminal damage at the Coranny Inn at Carnmore Road, Roslea during which he stole cash and a cash dispenser containing approximately £1,000 on March 6th and 7th.
McCullagh appeared before Monday’s hearing of Enniskillen Magistrates Court via videolink from Maghaberry Prison.
Deputy District Judge Amanda Brady was told that police were alerted to a burglary at the pub at 5.25am on March 6th after the alarm went off. The proprietor, who lives in an adjacent property, thought it was a false alarm but he heard banging and looked out the window to see a silver Lexus speeding away from the scene.
The pub owner discovered that the cash dispenser, containing £1,000 in £10 notes had been taken. At 6.58am the following morning, police received a report of a second break-in at the same premises when two poker machines had been damaged and more cash taken. On this occasion, a silver Peugeot was observed at the scene.
At 11am that same day police observed McCullagh driving the silver Lexus in Omagh and arrested him. A search of the defendant’s home uncovered £730 cash in £10 notes and several bags of coins scattered over a bed. The silver Peugeot was later discovered at the home of an associate of McCullagh’s in Clogher but the spare key was found in the defendant’s home.
When arrested and questioned, McCullagh claimed his Lexus car which had been captured on CCTV at the pub, may have been taken by others in the middle of the night. McCullagh told police he had sold the Peugeot and held on to the spare key as he was still owed money for it.
The defendant said the cash found at his home was payments for his work on a motorbike and as a gardener, adding that he had won £500 in a pub’s poker machine. He could also give no account of why the money was all in £10 notes and said he had gambled a lot, which was the reason for the large amounts of coins.
Defence solicitor John McCaffrey said his client had an extensive record stretching back to 1992.
“He saw an opportunity to target the premises in a remote area for two nights on the trot and went for it. He realises what he has done has caused annoyance and fear and for what it’s worth he wishes to apologise for what he did,” he added.